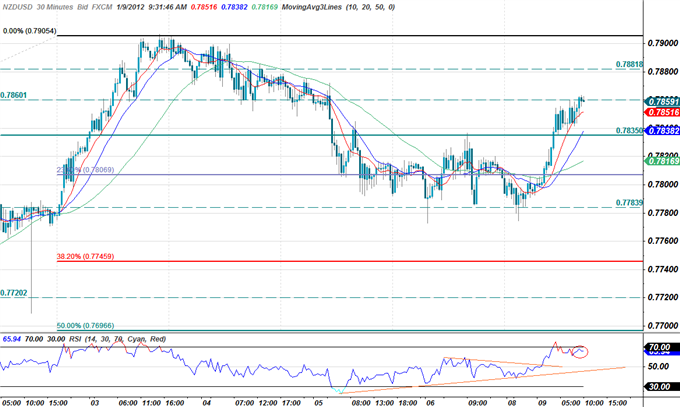 The New Zealand dollar is the top performer against a weaker greenback in early US trade with an advance of 0.69% on the session. Better-than-expected data overnight provided fuel for the kiwi’s rally today with November exports, imports, and the year-to-date trade balance all toping consensus estimates. The data coupled with a cautious rally in risk overnight with the NZD/USD pair breaching above the 0.7835 resistance level before encountering soft resistance at 0.7860. A breach here eyes subsequent topside targets at 0.7880 and the January 3rd high just below the 0.79-figure. Support now rests at 0.7835 backed by the 23.6% Fibonacci extension taken from the December 8th and January 3rd crests at 0.7807, 0.7784, and the 38.2% extension at 0.7745. Our medium term bias remains weighted to the downside despite this morning’s rally with a break back below the 0.7835 support level eyeing subsequent support targets. 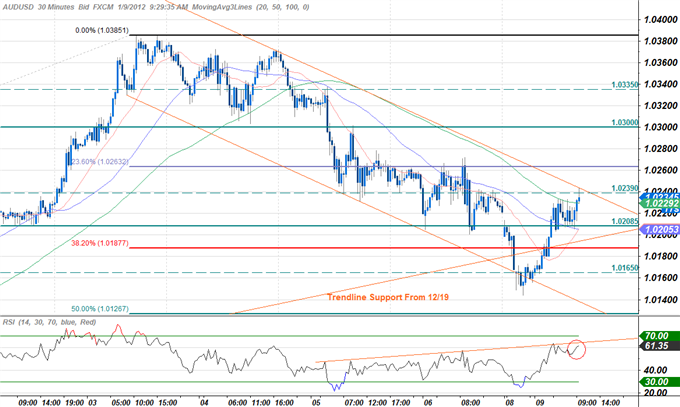 The Australian dollar is the weakest performer at the open despite a softer greenback, with the aussie advancing just 0.06% in early trade. A flat read on November retail sales weighed heavily on the high yielder in overnight trade with the pair falling as low as 1.0144 before mounting a counteroffensive in European trade. Consensus estimates were calling for a print of 0.4% m/m, up from a previous read of 0.2% m/m. The data saw interest rate expectations from the Reserve Bank of Australia shift dramatically with Credit Suisse overnight swaps now factoring a 111% chance of a 25basis point cut at the next RBA meeting while twelve month expectations are factoring another 108 basis points in cuts.

The AUD/USD continues to trade within the confines of a descending channel formation dating back to January 3rd. Strong resistance is seen at the convergence of our 1.0240 target level and channel resistance with targets eyed at 1.0285, the 38.2% Fibonacci extension taken from the December 8th and January 3rd crests at 1.0187, and 1.0165. A breach of the channel resistance eyes subsequent ceilings at the 23.6% extension at 1.0263, the 1.03-figure, and 1.0335. Our medium-term bias on the aussie remains weighted to the downside with a break out of the channel formation negating our short-term bias in the interim. For a detailed look at our current AUD/USD short-term setup refer to Thursday’s scalp report.