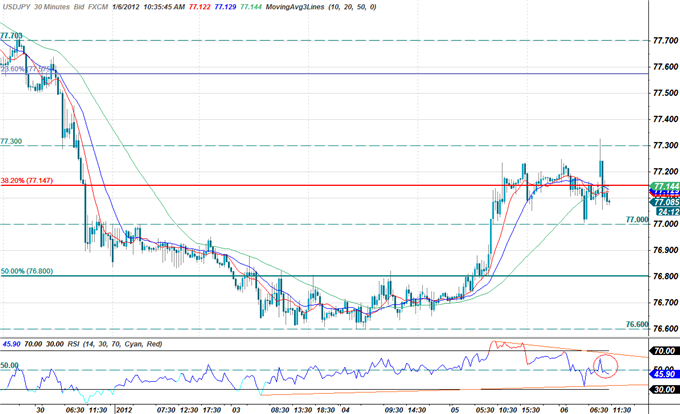 The Japanese yen it the top performer against a stronger dollar for a third consecutive day as dollar gains continue to outpace those of the yen. The USD/JPY is virtually unchanged with a fractional advance of just 0.02% on the session as the yen holds its ground despite broad based dollar advances. A stronger than expected print on today’s non-farm payroll report has fueled a rally in the greenback with the dollar advancing against all its major counterparts save the yen. Yesterday’s blowout ADP employment figure may have set expectations too high for the more encompassing NFP print with US equity markets drifting lower at the open as investors moved into moved into the reserve currency and US Treasuries. Non-farm payrolls added 200K jobs in December, besting calls for a print of 155K. The figure comes off a downwardly revised 100K print back in November suggesting that strength in the labor markets seems to be gathering pace with the unemployment rate falling to 8.5%.

The low yielding yen, often seen as a haven play in times of turmoil, advanced against all the majors save the dollar which remains well supported in early US trade. The USD/JPY continues to straddle the 38.2% Fibonacci extension taken from the October 31st and November 28th highs at 77.15. Interim resistance stands at 77.30 with a break eyeing subsequent ceilings at the 23.6% extension at 77.55 and 77.70. Support now rests at the 77-figure with subsequent floors seen at the 50% extension at 76.80, 76.60 and the 61.8% extension at 76.45. Look for the dollar to remain well supported here with the pair likely to keep a tight range throughout the session. 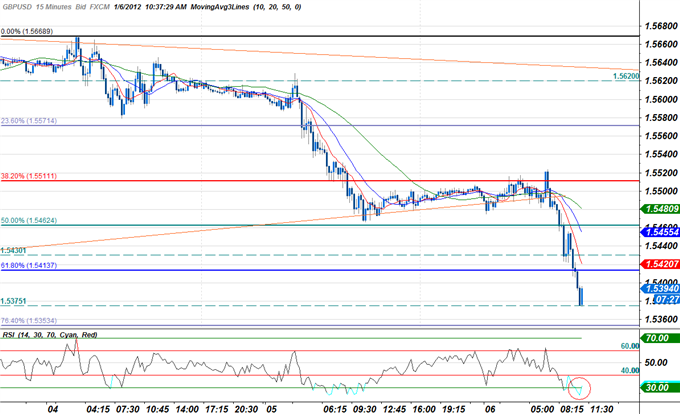 The British pound is the weakest performer against the dollar with a decline of more than 0.70% in early US trade. The pair broke below trendline support dating back to the December 29th low ahead of today’s NFP print before encountering stronger support at the 1.5375 level. Interim support holds here with subsequent floor seen at the 76.4% Fibonacci extension taken from the December 21st and January 3rd crests at 1.5355, 1.5330, and 1.5295. The sterling is likely to rebound as European markets close with topside resistance eyed at the 61.8% extension at 1.5415, backed quickly by soft resistance at 1.5430 and the 50% extension at 1.5460. Our medium-term bias on the pound remains weighted to the downside noting that the pair may move higher in intra-day trade after such a decline of magnitude,