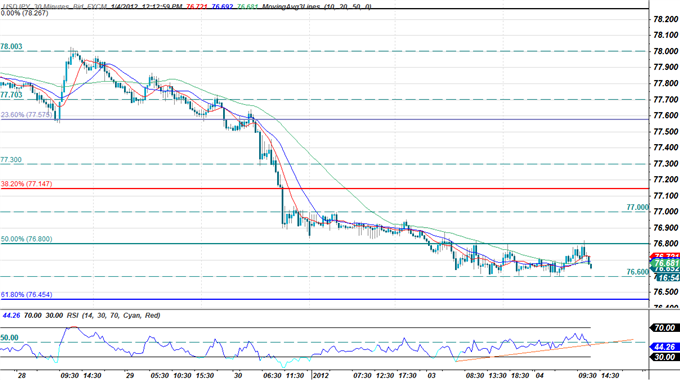 The Japanese yen it the top performer against a stronger dollar with the USD/JPY off by a modest 0.06% at noon in New York. The greenback has gone back on the offensive today after yesterday’s rally in risk saw the greenback tumble across the board with the Dow Jones FXCM Dollar Index (Ticker: USDollar) off my nearly 1%.The pair continues to hold within its recent range between 76.60 and the 50% Fibonacci extension taken from the October 31st and November 28th highs at 76.80. A breach above interim resistance eyes subsequent ceilings at the 77-figure, the 38.2% extension at 77.15, and 77.30. As we have continued to note, advances in the yen remain tempered by ongoing concerns about further intervention from Japanese officials. That said, a break below interim support eyes downside targets at the 61.8% extension at 76.45 and the 76-figure. 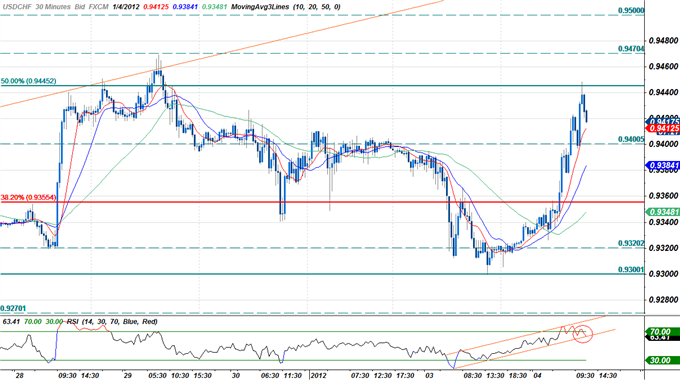 The Swiss franc is the weakest performer against the greenback with a decline of more than 1% on the session. News out of Switzerland has continued to weigh on the franc as reports that the wife of SNB Chairman Philipp Hildebrand may have conducted FX transactions ahead of the cap on the euro-franc exchange rate which was aimed at combating rapid appreciation in the franc. Speculation that Hildebrand may be forced to step down have slammed the franc has weakened against all its major counterparts in early US trade. The USD/CHF pair failed an attempt at a breach above the 50% Fibonacci extension taken from the October 27th and November 30th troughs at 0.9445. Interim resistance holds here with a breach eyeing topside targets at 0.9470, the 0.95-handle, and the 61.8% extension at 0.9535. Support rests at the 0.94-figure with subsequent floors seen at the 38.2% extension at 0.9355 and 0.9320. Look for the pair to remain well supported at these levels as swissie weakness couples with broad based dollar strength in intra-day trade.