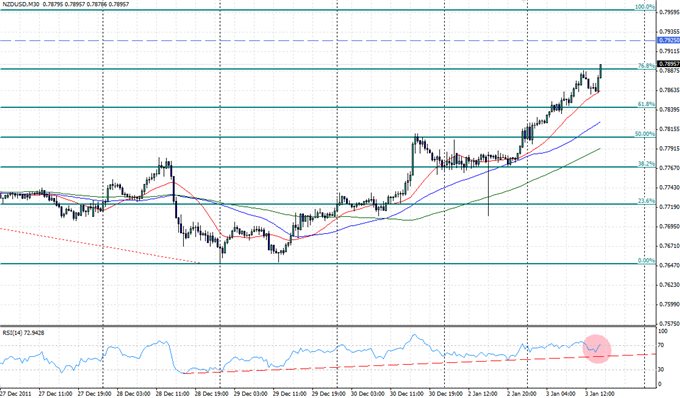 The New Zealand dollar is the top performing currency against the greenback an hour into US trade with an advance of more than 1.40% on the session. Despite a mixed performance in European stocks, US equities have kicked off the year with an impressive rally with all three major indices surging more than 2%. Stronger than expected ISM manufacturing data helped fueled today’s rally with the December print marking the 29th consecutive month of growth in the manufacturing sector. November construction spending also topped estimates with a print of 1.2% m/m, beating calls for a read of just 0.5% m/m. Higher yielding currencies have remained on the offensive early in the session with the kiwi and the aussie acting as chief beneficiaries of risk-on flows. 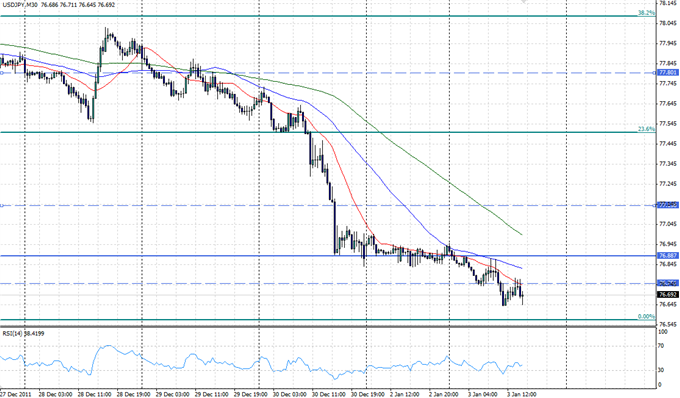 The yen is the weakest performer against a heavy dollar with the USD/JPY sliding 0.26% in early trade. Although the dollar has come under considerable pressure early in the session, yen advances are likely to remain tempered as intervention concerns limit gains. The pair broke below the 76.90 support level in overnight trade before losing steam just ahead of interim support at 76.55. This level is likely to hold with topside resistance targets seen at 76.75, 76.90, and 77.15. Key resistance rests with the 23.6% Fibonacci extension taken from the October 31st and November 18th troughs at 77.50. The medium-term outlook for the USD/JPY remains weighted to the topside.