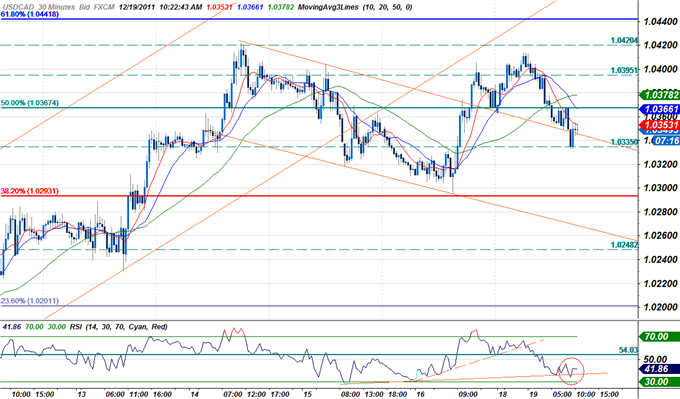 The Canadian dollar is the top performer against a stronger greenback in early North American trade with an advance of 0.31% on the session. Stronger than expected wholesale sales for the month of October bested estimates with a print of 0.9% m/m, up from a previous read of 0.5% m/m. Consensus estimates were looking for a print of just 0.1% m/m. The data, coupled with stronger crude oil prices, saw the USD/CAD briefly break below former trendline resistance now acting as support around 1.0345 before settling just below the 20 SMA at 1.0353.

Look for the loonie to pare some of the advance as risk sentiment tapers off in US trade with a break back above the 50% Fibonacci extension taken from the October 27th and December 8th troughs at 1.0365 eyeing topside targets at the 1.04-handle, 1.0420 and the 61.8% extension at 1.0440. Interim support holds at 1.0335 with a break here eyeing subsequent support targets at the 38.2% extension at 1.0295, 1.0250, and the 23.6% extension at 1.0200. Tomorrow trades will be eyeing economic data out of Canada with the November CPI figures on tap. Estimates call for the pace of inflation to have eased last month with the annualized figure calling for a hold at 2.9%. 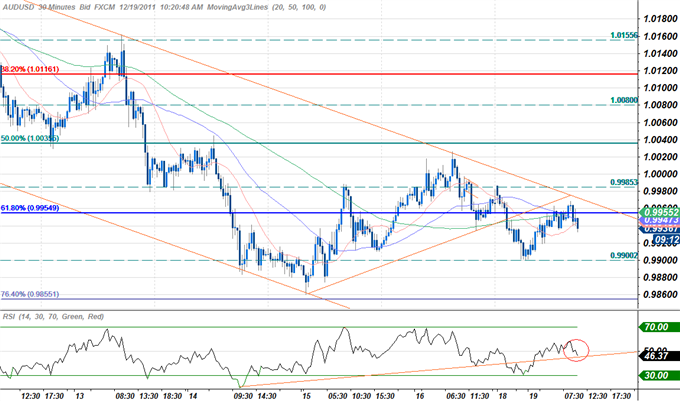 The Australian dollar is the weakest performer against the greenback with a decline of 0.40% on the session. Risk appetite seems to have shifted in early US trade with European equity markets relinquishing a large portion of the gains seen in overnight trade while US stock indices dipped into the red ahead of afternoon trade. The Aussie remains at risk for further losses after breaking below the 61.8% Fibonacci extension taken from the November 13th and December 8th crests at 0.9955 in Asia Pacific trade. Interim support for the aussie rests at the 0.99-figure with a break eyeing subsequent floors at the 76.4% Fibonacci extension at 0.9855, 0.9815, and 0.9775. Longer-term targets are held at the 100% extension just below the 0.97-handle. Topside resistance holds with channel resistance followed by 0.9985, the 50% extension at 1.0030, and 1.0080. We continue to favor shorts on the aussie so long as price action remains below the 1.0080 level with a topside break eyeing subsequent targets at the 38.2% extension at 1.0115 and 1.0150.

Overnight trader will be eyeing data out of Australia with the Conference Board of leading index and the RBA meeting minutes on tap. Investors will be closely eyeing the minutes for insight into the central bank’s policy outlook as conditions in China and ongoing concerns over the crisis in Europe continue to threaten growth prospects for the continent nation.