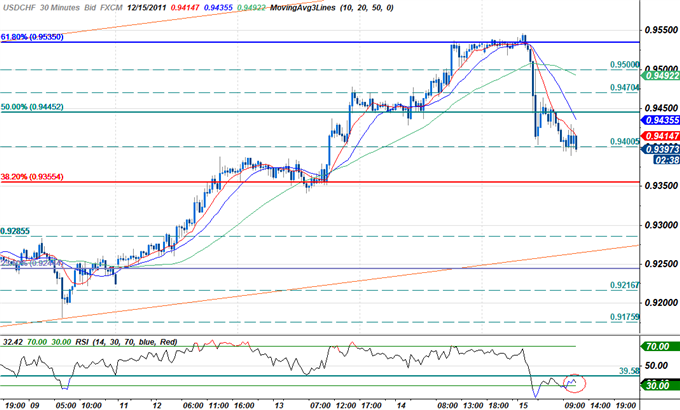 The Swiss franc is the top performing currency against a weaker dollar at noon in New York with an advance of 1.38% on the session. The greenback is under pressure across the board today after a stronger than expected bond auction in Spain eased debt concerns and favorable employment data out of the US saw risk appetite pick up. However the rally lacks conviction with the major indices paring gains early in the session.

As expected the Swiss National Bank held interest rates at 0% with the central bank making no change to the EUR/CHF peg at 1.20. Speculation that the SNB was looking to raise the peg saw the swissie come under pressure earlier in the week. With no imminent threat of further central bank intervention, the franc is likely remain well supported here with a break below interim support at the 0.9400-figure eyeing subsequent floors at the 38.2% Fibonacci extension taken from the October 27th and November 30th troughs at 0.9355, and 0.9285. The pair continues to hold within the confines of an ascending channel dating back to October 24th with topside resistance seen at the 50% extension at 9445, 0.9470 and the 0.95-handle. 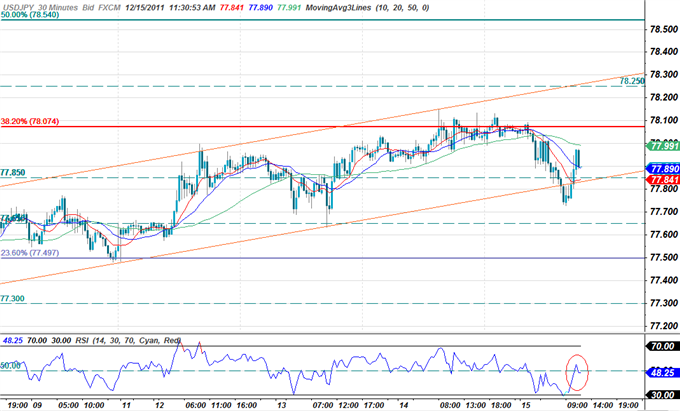 The Japanese yen is the weakest performing currency against the greenback with an advance of just 0.13% half way through the session. Declines in the dollar have outpaced those of the yen as risk-on flows saw both “haven” currencies come under pressure. The USD/JPY has continued to trade within the confines of an ascending channel dating back to December 8th with a brief false break this morning quickly paring losses to trade back above the 77.85 support level. A break below this level eyes subsequent floors at 76.65 and the 23.6% Fibonacci extension taken from the October 30th and November 18th troughs at 77.50. Topside resistance stands at the 38.2% extension at 78.07, backed by the convergence of channel resistance and the 78.25 resistance level. Longer-term targets are held at the 50% extension at 78.54. Our medium-term bias on the pair remains weighted to the topside as ongoing European sovereign debt concerns are likely to continue to weigh on risk appetite. Accordingly we expect to continue to see advances in the dollar outpace those of the yen on risk-off flows as yen advances remain tempered on intervention concerns.