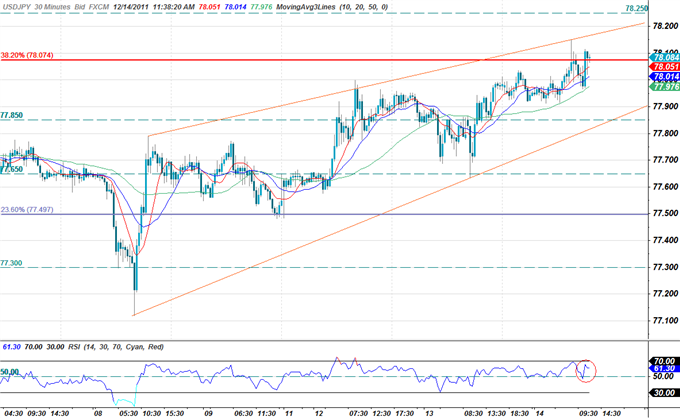 The Japanese yen is the top performing currency against a stronger dollar with a marginal decline of just 0.08% on the session. Risk appetite took a dramatic turn in pre-market trade after an Italian bond auction saw record high yields as investors continue to seek refuge in haven assets like German bunds, US Treasuries, and the greenback. As we have continued to note, advances in the dollar continue to outpace those of the yen on risk-off flows as yen advances remain tempered on intervention concerns.

The USD/JPY continues to struggle to hold above the 38.2% Fibonacci extension taken from the October 30th and November 18th troughs at the 78-handle as the pair continues to trade within an ascending wedge formation. A breach above trendline resistance eyes topside targets at 78.25, the 50% extension at 78.50 and the 61.8% extension at the 79-figure. Interim support rests at 77.85 backed by 77.65 and the 23.6% extension at 77.50. Although the pair continues to hold an extremely tight range, we continue to favor topside moves as haven flows are likely to keep the greenback well supported. Overnight traders will be eyeing data out of Japan with the 4Q Tankan large all industry capex highlighting the economic docket. 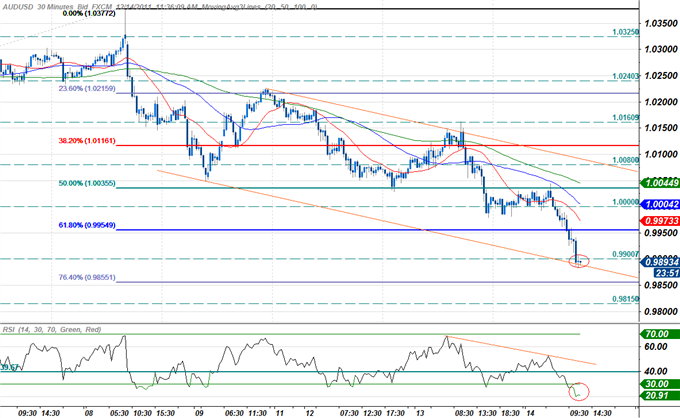 The Australian dollar has continued to come under pressure as European concerns weigh on broader markets sentiment with the high yielder sliding more than 1.2% at noon in New York. We continue to favor the aussie lower at these levels with the pair now rests at the convergence of channel support and the 0.99-handle after triggering all our scalp targets in overnight trade. This level may provide some interim support as the Dow Jones FXCM Dollar Index (Ticker: USDollar)encounters resistance at the 10,070 level cited in yesterday’s USD trading report.

A break here eyes subsequent floors at the 76.4% Fibonacci extension taken from the November 13th and December 8th crests at 0.9855, 0.9815, and 0.9750. Stronger support is seen lower at the 100% extension at the 0.97-figure. Interim resistance now stands at the 61.8% extension at 0.9955 backed by parity, and the 50% extension at 1.0035. An interim bounce may be in the cards after the substantial drawdown seen over the past few sessions with a break above channel resistance shifting our short-term focus. Overnight investors will be eyeing data out of Australia with the December consumer inflation expectations and motor vehicle sales on tap.