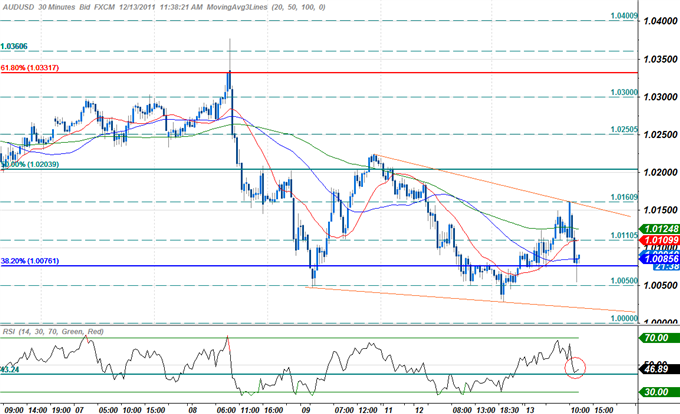 The Australian dollar is the strongest performing currency against a firmer dollar at noon in New York with an advance of just 0.15%. Markets rallied during the European session as a stronger than expected bond auction in Spain temporarily eased debt concerns with yields coming in a full percentage point lower than a month ago, albeit still at elevated levels. Sentiment quickly shifted early in US trade however as newswires reported that German Chancellor Angela Merkel had rejected proposals to increase the bailout fund for European Sovereign debt.

The aussie sharply reversed course as market sentiment turned with traders jettisoning higher yielding assets for the perceived safety of the greenback. Interim support for the AUD/USD now rests at the 38.2% Fibonacci retracement taken from the November decline at 1.0075 with subsequent floors seen at 1.0050, parity, and 0.9950. Topside resistance now stands at 1.0110 backed by 1.0160, the 50% retracement at the 1.02-figure, and 1.0250.Look for the aussie to remain under pressure as European debt concerns continue to weigh on broader market sentiment with the dollar and the yen acting as chief beneficiaries of risk-off flows. 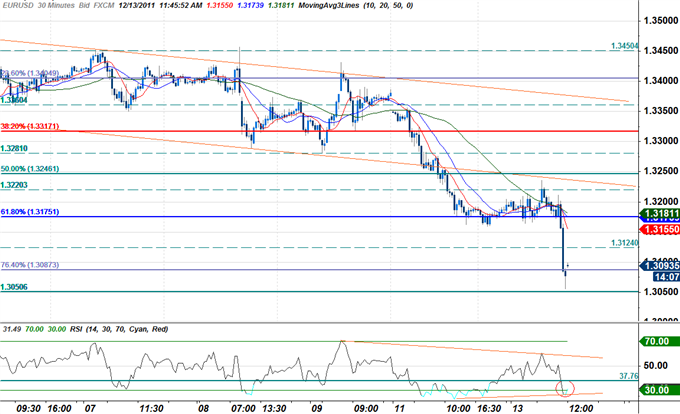 The euro is the worst performing currency against the greenback as headlines out of Europe sparked a sell-off in risk with the single currency falling more than 0.80% early in the session. The EUR/USD broke below the key 61.8% Fibonacci extension taken from the November 13th and December 2nd crests at 1.3175 before finding solace around the 76.4% extension at 1.3085. A likely break here eyes interim support at 1.0350 backed by the 1.30-handle, and the 100% extension at 1.2950. Topside resistance now stands at 1.3125 with subsequent ceilings eyed at 1.3175and 1.3220. The medium to long-term bias on the single currency remains weighted to the downside as officials struggle to convince markets that they have a plan in place to save the currency bloc. Overnight traders will be eyeing industrial production data out of the region with consensus estimates calling for production to come in flat for the month of October. The year on year data is expected to slide to 2.1% from a previous read of 2.2% y/y.