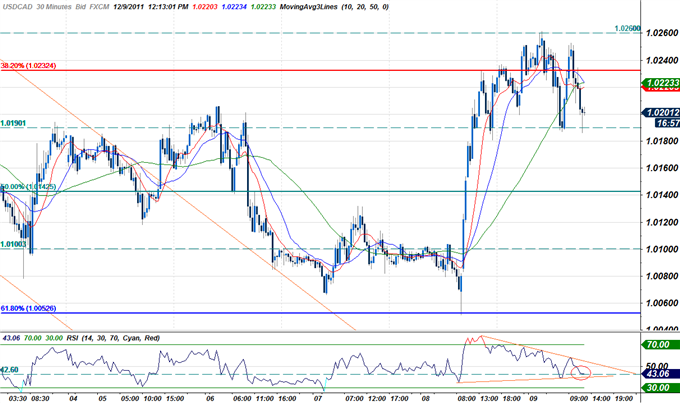 The Canadian dollar is the top performing currency against the greenback mid-day in New York with an advance of nearly 0.30% on the session. The risk trade as back on as EU officials unveil a plan to strength fiscal integration and implement stronger budgetary discipline among member nations in an effort to combat the debt crisis which has ravaged the region for nearly two years now. Although the details so far do not seem to address the underlying solvency issue facing periphery nations, the move towards a more unified Europe was enough to ease imminent debt concerns. Further supporting the rally was a stronger-than-expected print on the December University of Michigan confidence survey which came in at 67.7 marking a six month high on the report and besting calls for a print of just 65.8. As the largest trading partner with the US, the loonie saw a boost in demand as improved risk appetite coupled with stronger US data saw traders move into higher yielding assets.

The USD/CAD failed to hold above the 38.2% Fibonacci extension taken from the October 4th and November 25th crests at 1.0230 before encountering support tat the 1.0190 level. A break here eyes subsequent floors at the 50% extension at 1.0140, the 1.01-figure, and the 61.8% extension at 1.0050. Topside resistance holds at 1.0230 backed by 1.0260, the 1.03-handle, and the 23.6% extension at 1.0340. Although our medium-term bias remains weighted to the topside, the loonie may continue to track risk higher with the pair likely to remain under pressure so long as broader market sentiment remains supported. 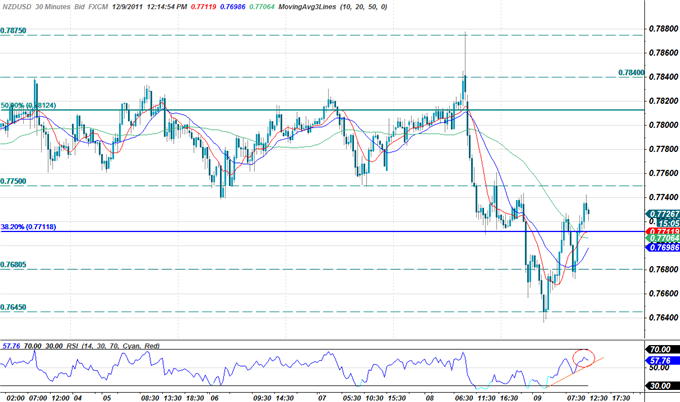 The kiwi is the weakest performer against the dollar with the NZD/USD struggling to pair some of the sharp overnight losses that saw the pair trade as low as 0.7640. Asia Pacific markets were softer with risk aversion flows propping up the dollar and other lower yielding assets ahead of the European open. However, despite the advance in stocks, currencies continue to show a lack of conviction after the EU summit unveiled a new fiscal pact aimed at limiting sovereign deficit spending borrowing across the region. 26 out of the 27 EU leaders agreed to pursue greater fiscal integration and implement stricter budgetary discipline with the UK the only member to reject the proposal.

The NZD/USD rests just above the 38.2% Fibonacci retracement taken from the November descent at 0.7710 with subsequent floors seen at 0.7680, 0.7645, and the 23.6% retracement at 0.7590. Interim resistance is eyed at 0.7750 backed by the 50% retracement at 0.7812, 0.7840, and 0.7875. Look for the kiwi to hold its current range as trader await further clarification from European officials on the agreed measures to be implemented to combat the debt crisis and ensure free flowing liquidity to struggling sovereigns.