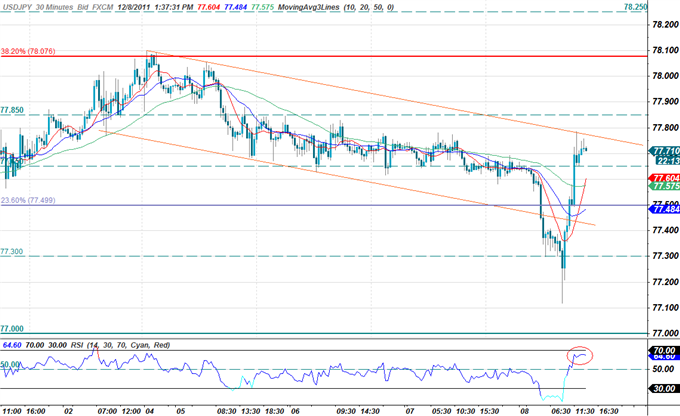 The yen is the top performing currency against a sharply stronger greenback with a fractional loss of just 0.06% at 2pm in New York. Remarks made by ECB President Mario Draghi prompted today’s sell-off in risk after he cited that the central bank would not continue purchasing sovereign debt to cap bond yields. Draghi also noted that the decision was not unanimous with the central bank president stating that the discussion was ‘lively’ as opinions on today’s decision were divided. The news amplified debt concerns as yields on periphery debt surged across the board and higher yielding assets plummeted. Today’s developments come just ahead of the much anticipated EU summit which will conclude tomorrow. All eyes now fall on German Chancellor Angela Merkel and French President Nicolas Sarkozy who will be outlining a “comprehensive plan” to deal with the ongoing debt crisis while calling for greater fiscal discipline and integration among member nations. However it remains to be seen if Euro zone members would be willing to sacrifice their sovereignty and succumb to the rules and strict mandates that are expected to be imposed on region.

Classic haven flows have dominated trade in the North American session with the lower yielding currencies outperforming as traders seek refuge ahead of tomorrow’s massive event risk. The yen and the greenback continue to be the chief beneficiaries of risk-off flows with gains in the greenback slightly outpacing those of the yen. Accordingly the pair has continued to hold within its recent range with the USD/JPY holding within the confines of a descending channel formation dating back to December 2nd after briefly dipping below channel support.

A breach above channel resistance eyes topside targets at 77.85 backed by the 38.2% Fibonacci retracement taken from the October intervention advance at the 78-handle, and 78.25. Interim support rests at the 23.6% retracement at 77.50 with subsequent floors seen at 77.30 and the 77-figure. Our longer term bias remains weighted to the topside as intervention concerns continue to linger, limiting substantial advances in the yen. Traders will be eyeing key data out of Japan with 3Q GDP data on tap overnight. Consensus estimates call for an annualized GDP print of 5.1%, down from a previous read of 6.0%. 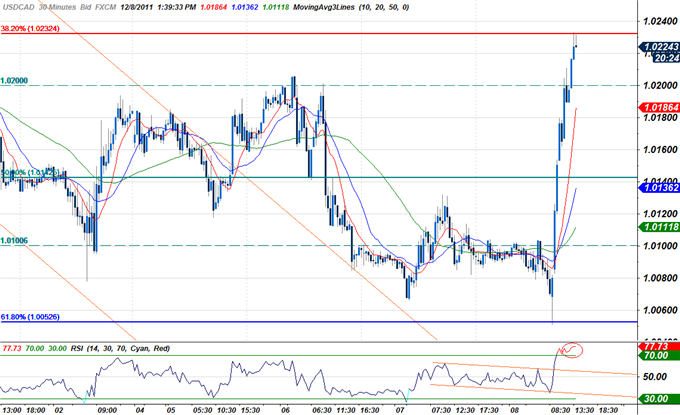 The Canadian dollar is the weakest performer of the majors against the greenback with the USD/CAD surging 1.28% two hours ahead of the close in on Wall Street. Higher yielding currencies like the aussie, the kiwi, and the loonie have come under tremendous pressure today as traders sacrificed yields for the perceived safety of the greenback. The loonie was particularly hard hit as crude oil prices came off sharply on concerns over global growth as central banks around the world continue to lower GDP projections and forecasts.

The USD/CAD saw a sharp rebound off the 61.8% Fibonacci extension taken from the October 4th and November 25th crests at 1.0050 before encountering resistance at the 38.2% extension at 1.0230. This levels is expected to hold into today’s close with a breach eyeing subsequent topside targets at 1.0280, the 1.03-figure, and the 23.6% extension at 1.0340. Interim support now rests at the 1.02-handle backed by the 1.0180 and the 50% extension at 1.0140. The medium-term outlook for the pair remains weighted to the topside as ongoing debt concern are likely to weigh on risk to the benefit of the greenback. Tomorrow traders will be eyeing data out of Canada with 3Q labor productivity and international merchandise trade data on tap.