British Pound Breaks Technical Resistance Ahead of Bank of England 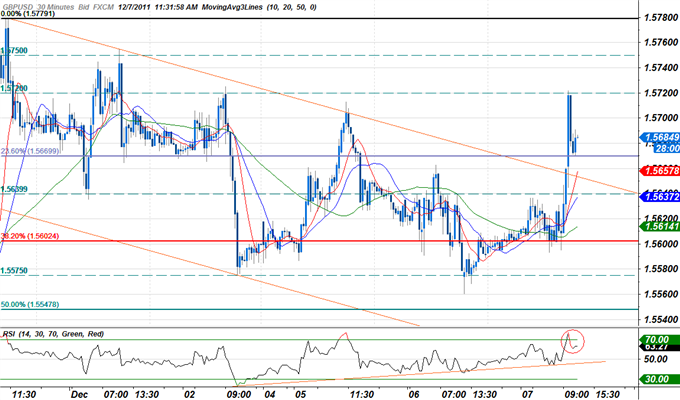 The British pound is the top performing currency against a weaker dollar with the GBP/USD advancing 0.56% at noon in New York. The gains come despite weaker than expected economic data overnight which saw industrial and manufacturing production miss consensus estimates with both sectors contracting at a faster pace than the previous month. Still, hopes of a resolution to the European crisis at this Friday’s EU summit continue to support markets sentiment. It’s worth noting that the bearish risk trade seems to have reached a point of exhaustion with the trade becoming increasingly crowded at these levels. Taking this into account, markets could find scope to move higher as we head into key event risk tomorrow and Friday.

Overnight traders will be closely eying the Bank of England interest rate decision with consensus expectations calling for the central bank to leave the benchmark rate unchanged at 0.50%. Investors will be specifically looking for whether or not the BoE will look to expand its asset purchases from the current target of £275 billion after the Chancellor of the Exchequer announced that Britain would not be able to reach its goal of eliminating the structural deficit by 2014-15. And with more austerity seen just over the horizon, the central bank may look to expand its asset purchases to keep the fragile recovery on track as deficit reduction measures continue to weigh on economic growth. 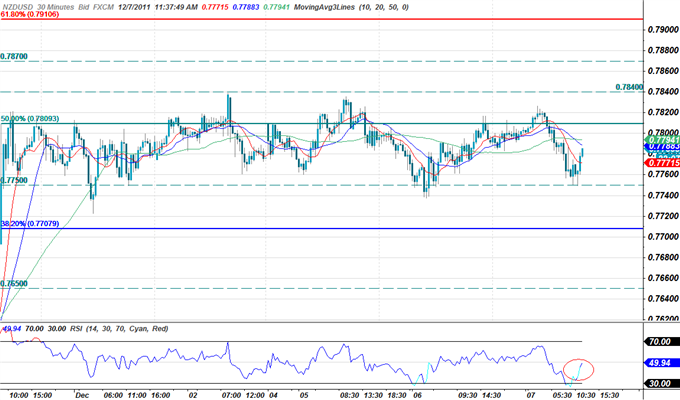 The New Zealand dollar is the weakest performer with a loss of 0.26% against the greenback. The NZD/USD continues to hold within its recent range however with price action holding between 0.7750 and 0.7840 for the past five sessions. Again we note here that the short trade has become very crowded with markets likely to be range bound heading into Friday’s EU summit. With expectations for a concrete and cohesive plan from German Chancellor Angela Merkel and French President Nicolas Sarkozy keeping markets afloat, the possibility for a sharp reaction towards the close of the week continues to increase. Specifically as it pertains to the kiwi, price volatility is likely to remain subdued as traders look to the Reserve Bank of New Zealand interest rate decision on tap later this afternoon. Consensus estimates expect the central bank to leave the benchmark interest rate unchanged at 2.50% with traders paying particular attention to the accompanying policy statement as recent economic data out of the isle-nation has continued to improve