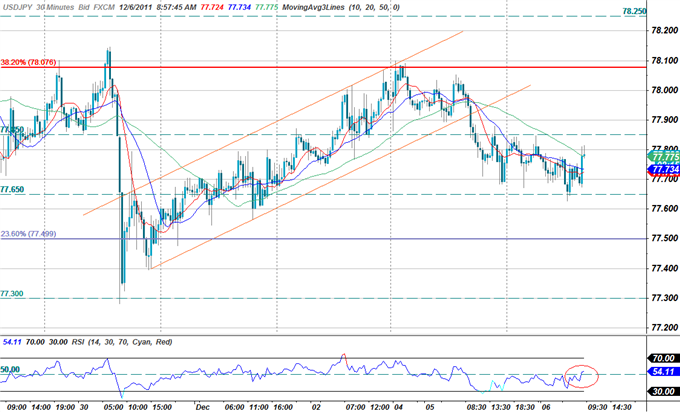 The yen is the top performing currency against a stronger dollar in early North American trade, with the USD/JPY virtually unchanged at the open. The pair continues to trade within a tight range as both the dollar and the yen have tracked broader risk trends. The yen is higher against most its major counterparts as risk appetite looks to taper off on news that rating agency Standard & Poor’s had put the nearly all the EU nations on negative watch for a possible downgrade yesterday. The move comes just days ahead of a crucial EU summit and the ECB rate decision where the central bank is widely expected to cut the benchmark interest rate by another 25 basis points for the second consecutive month.

The USD/JPY broke below the ascending channel formation noted in yesterday’s Winners/Losers report before finding support at the 77.65 level. Interim support holds here with subsequent floors seen at the 23.6% retracement taken from the intervention advance at 77.50 and 77.30. Topside resistance stands at 77.85 backed by the 38.2% retracement at the 78-handle and 78.25. Look for the pair to continue to trade within its recent range as swings in risk sentiment continue to see both the dollar and the yen move in tandem. 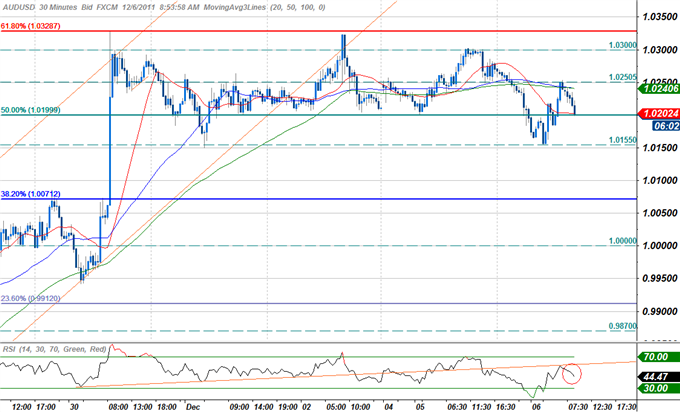 The Australian dollar is the weakest performing currency in early US trade with a loss of 0.64% against the greenback. The Reserve Bank of Australia cut the benchmark interest rate by 25 basis points to 4.25% as expected last night with the central bank Governor Glenn Stevens citing that “Financial conditions have become much more difficult, especially in Europe.” Stevens went on to say that, “This, together with precautionary behavior by firms and households, means that the likelihood of a further material slowing in global growth has increased.” The most notable remark made by the Governor was regarding the situation in China with Stevens noting that, “China’s growth has been slowing. Trade in Asia is now, however, seeing some effects of a significant slowing in economic activity in Europe.” The statement was the first time that the central bank has acknowledged the threat of a slowdown in Asia’s powerhouse and suggests that Australian officials continue to see a risk to the economy should conditions in China continue to deteriorate. The increasingly dovish outlook leaves the door open for further easing from the RBA with Credit Suisse overnight swaps now factoring a 116% chance of another 25 basis point cut next month which would mark the third rate cut in three months from the central bank.

The AUD/USD broke below the 50% Fibonacci retracement taken from the October 27th decline at the 1.02-figure overnight before rebounding off the 1.0155 support level to trade just above the 1.02-handle ahead of the US open. Interim support rest here with a break once again eyeing 1.0155, the 38.2% retracement at 1.0070 and parity. Topside resistance holds at 1.0250 with subsequent ceiling seen at the 1.03-figure and the 61.8% retracement at 1.0330. Look for the aussie to remain under pressure as interest rate expectations and concerns over the ongoing crisis in Europe continue to weigh on broader market sentiment.

Overnight traders will be eying key data out of Australia with 3Q GDP figures on tap. Consensus estimates call for the quarter on quarter print to hold at 1.2% while the year on year print is expected to climb to 2.3% from a previous read of 1.4% y/y. A weaker than expected print here would likely weigh heavily on the aussie as the data would echo concerns cited by RBA Governor Stevens last night with longer term targets for the aussie eyed at the 99-figure.