Aussie Climbs Ahead of RBA- US Dollar Losses to be Limited 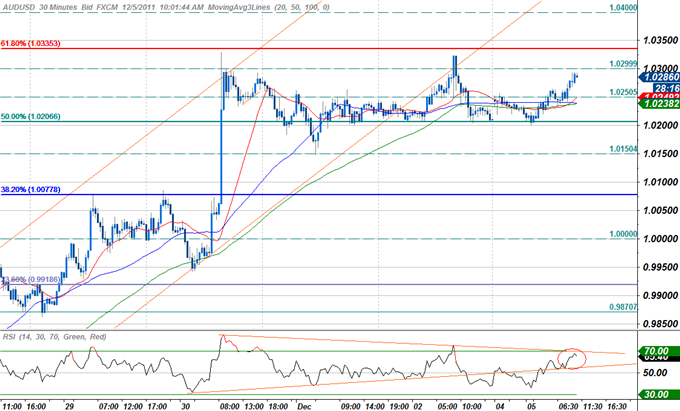 The Australian dollar is the top performing currency against a weaker dollar as headlines out of Europe fueled a reprieve from concerns over the ongoing debt crisis with the aussie advancing 0.80% early in US trade. Italian Prime Minister Mario Monti will introduce proposals to reduce the EU’s second largest debt load to the Chamber of Deputies in Rome today ahead of a critical week for the single currency. The move towards stricter austerity cooled debt concerns as market exhaustion with regards to the crisis begins to set in. The dollar is sharply lower across the board as risk appetite continues to improve with the equities and higher yielding currencies rallying throughout European trade. Losses are expected to be tempered ahead of key data on this week’s docket.

The aussie broke above the 1.0250 support level in pre-market trade with topside targets eyed at the 1.03-handle, the 61.8% Fibonacci retracement taken from the October 27th decline at 1.0335, and 1.04. Interim resistance rests at the 50% retracement at 1.0206 with subsequent floors seen at 1.0150 and the 38.2% retracement at 1.0080. Look for the risk trade to remain well supported here early in the week as traders await major event risk out of Europe with the ECB rate decision and EU summit on tap. Overnight investors will be eyeing key data out of Australia with the 3Q current account balance and the RBA interest rate decision on tap. The central bank is widely expected to cut the benchmark interest rate by 25 basis points to 4.25% with Credit Suisse overnight swaps now factoring an 84% chance of a cut tonight. Twelve month expectations call for an additional 129 basis points in further cuts from the RBA as the continent nation looks to ease on fears of a significant slowdown in China and global growth. 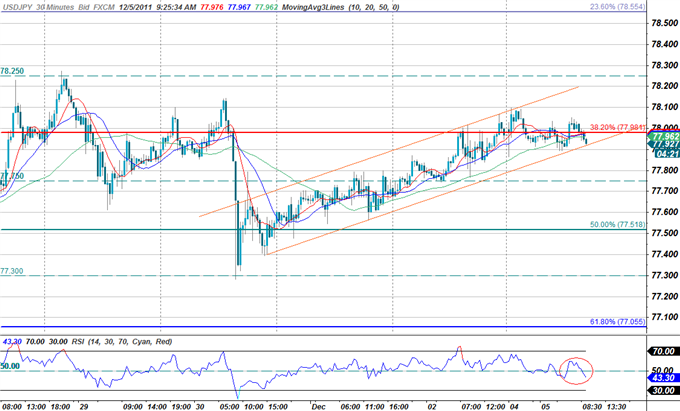 The yen is the weakest performer in North American trade with an advance of just 0.14% as the yen also came under pressure amid a rally in risk with traders on the chase for yields at the start of the week. The yen fell against all its major counterparts save the dollar as the risk-on trade saw dollar losses outpace those of the yen. Although our medium-term outlook on the pair remains weighted to the topside, the probability for further downside moves here are high with intra-day scalps eyeing targets lower in the interim.

The USD/JPY continues to hold within the confines of an ascending channel formation with a break below trendline support eyeing subsequent floors at 77.75, the 50% Fibonacci retracement taken from the intervention advance at 77.50, and 77.30. Topside resistance comes in to play around 78.25 and is backed by the 23.6% retracement at 78.55 and the 79-figure. Look for the pair to remain under pressure as market sentiment continues to improve with massive event risk later in the week likely to shift our bias as investors remain focused on developments out of Europe.