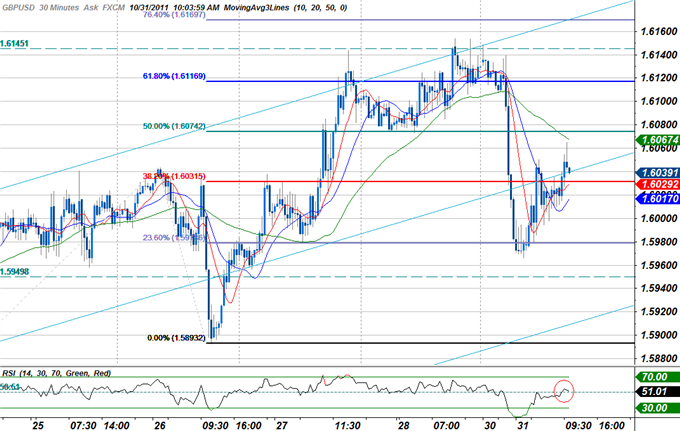 The sterling is the strongest performer against a weaker greenback an hour into US trade with the pound off just 0.50% as the dollar surged across the board. Rising concerns about the EU plan announced last week coupled with a Japanese currency intervention and end of the month profit taking saw the greenback mount a substantial assault with the reserve currency besting all its major counterparts early in the session. The pound continues to trade within the scalp targets mapped out in Thursday’s report with the GBP/USD pair breaking back above the 38.2% Fibonacci extension taken from the October 20th and 26th at 1.6030. Interim support now rests here with subsequent floors seen at the 23.6% extension at the figure, the 23.6% extension at 1.5980, and 1.5950. Topside resistance targets are seen at the 50% extension at 1.6070 followed by the 61.8% extension at 1.6115 and 1.6150. Traders will be eyeing data out of the UK tomorrow with nationwide house prices, and 3Q GDP data on tap. 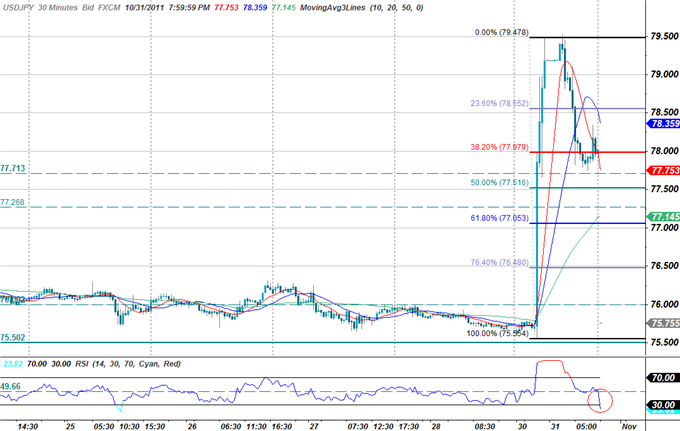 It comes as no surprise that the yen is the weakest performing currency at the open with a decline of 2.86% against a stronger dollar. Japan stepped in with one of the largest FX interventions from the Ministry of Finance last night with the reported sale of more than ¥7 trillion to stem the rapid appreciation of the currency which had tested all-time highs against the greenback in early Asia Pacific trade. The USD/JPY surged 375pips before losing steam ahead of the 79.50 level. A pullback of some magnitude is expected here as traders attempt to fade the initial run-up with the pair already paring more than 150pips off the overnight high. The descent is likely to be tempered however as Japanese officials warn that they will continue to closely monitor FX markets and ahead of key event risk over the next few days including interest rate decisions from the RBA, the FOMC, and the ECB, and the much anticipated US non-farm payroll figures on Friday.

Interim support rests at 77.70 with subsequent floors seen at the 50% Fibonacci retracement of the overnight advance at 77.50, 77.25, and the 61.8% retracement at the 77-figure. Topside resistance is eyed at the 23.6% retracement at 78.55 backed by the 79-handle, and 79.50. We urge caution on trades in this pair with the descent is likely to be choppy and gradual as the yen consolidates.