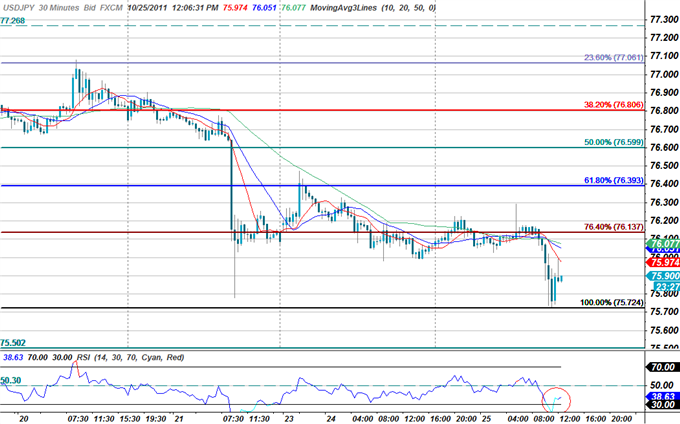 The yen is the top performer mid-day in US trade with an advance of 0.26% against a stronger dollar. Concerns that European officials may not be able to reach a consensus on a proposed rescue package for the region’s most indebted nations started to weigh on sentiment after EU reports noted that leaders are counting on the ECB to continue bond purchases as part of the crisis package. The move would essentially force the politically independent central bank to participate in supporting euro zone bond markets. Risk appetite has gone on the defensive with the yen the chief beneficiary of risk-off flows. Although the dollar has also strengthened against most of its major counterparts, talks of further quantitative easing measures from Fed officials have weighed on demand for the greenback, boosting haven flows into the yen. However as the yen continues to appreciate, traders remain very attentive to rhetoric out of Japan as a higher valued currency weighs on the export driven economy and intervention talks may be on the horizon.

Overnight traders will be eyeing data out of Japan with September retail trade figures on tap. Highlighting the calendar over the next 24 hours will be the Bank of Japan rate decisions. Although the central bank is widely expected to hold rates, investors will be lending a keen ear to comments from officials both on the strength of the yen and on future policy for the isle-nation. 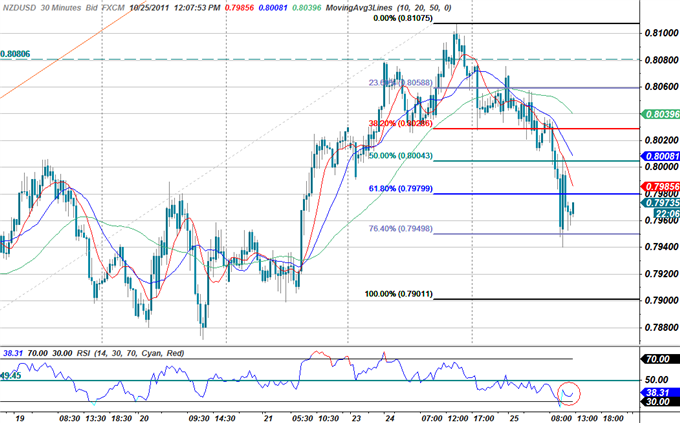 The kiwi was the weakest performing currency against the greenback, falling more than 1.3% on early North American trade. Inflation data out of New Zealand missed expectations with 3Q consumer prices printing at 4.6% y/y, down from a previous print of 5.3% y/y. The slowdown in domestic inflation weighed on interest rate expectations as the central bank will be less likely to raise rates should inflation significantly ease. The pair broke below the 61.8% Fibonacci extension taken from the October 17th and 24th crests at 0.7980 before rebounding off the 76.4% extension at 0.7950. Interim resistance now rest here with a break below eying the 100% extension at the 0.79-figure and 0.7880. Topside resistance holds at the 0.7980 with subsequent ceilings eyed at the 0.80-handle and the 38.2% extension at 0.8030. The NZD/USD may pare some of these steep declines but looks to move lower in the days ahead of market sentiment continues to deteriorate.

Overnight traders will be eyeing the Reserve Bank of New Zealand for the interest rate decision and trade balance figures. Again we look to the central bank of an update on the domestic economy and an assessment of the current conditions. It’s likely the RBNZ may signal an increased willingness to keep rates at record lows as softer inflation and concerns over the stability of the global financial sector take root. Subsequently the kiwi may find itself on the defensive as prospects for future rate hikes dwindle.