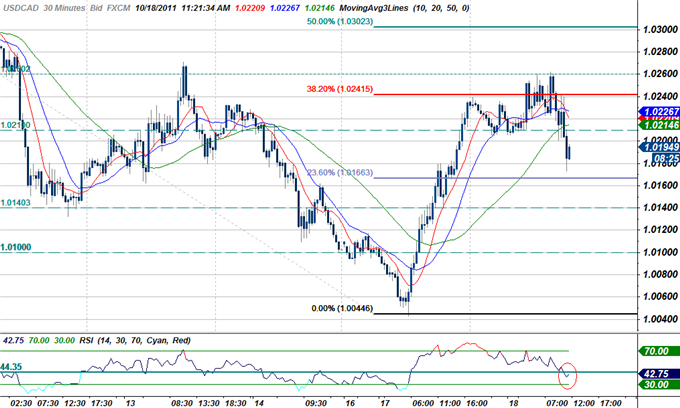 The Canadian dollar is the top performer against the greenback with an advance of more than 0.46% in early North American trade. Although risk appetite has improved since yesterday’s sharp sell-off, the rally lacks proper footing with equities dipping in and out of positive territory early in the session. In the meantime, higher yielding growth backed currencies like the aussie and the loonie have continued to pare some of the losses suffered yesterday with the USD/CAD breaking back below interim support at 1.0210. We noted these levels in yesterday’s USD/CAD Scalp Report where we aimed to play the long side for an initial tag off 1.0260. The pair now targets the 23.6% Fibonacci extension taken from the September 27th and October 17th troughs at 1.0166 with subsequent floors seen at 1.0140 and the 1.01-figure. Topside resistance now stands at 1.0210 backed by the 38.2% extension at 1.0240 and 1.0260. Stocks were up modestly at noon in New York amid a volatile session, suggesting the rally in risk may be short lived with the loonie likely to pare some of the day’s advance later in the session. 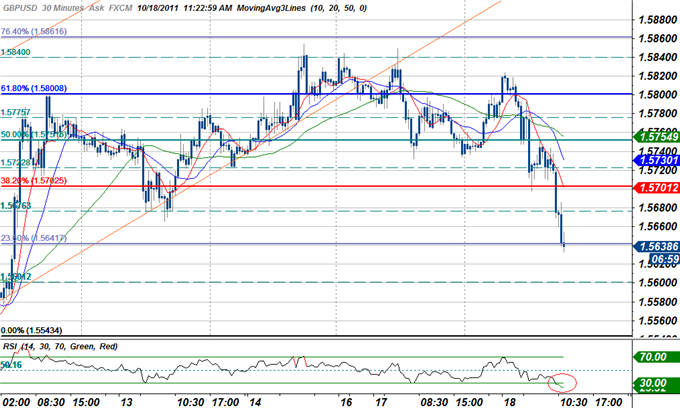 The sterling was is the worst performer among the majors, sliding nearly 0.60% against the dollar by mid-day. Inflation data overnight hit a record high with a print of 5.2% y/y, missing calls for a read of 4.9% y/y. Although the Bank of England believes deflationary pressures will persist with the MPC citing an increasing risk of undershooting the 2% inflation target, today’s data raises concerns about price stability in the interim. With interest rate expectations from the BoE already bottomed out, the sterling is likely to remain under pressure here with risk aversion flows likely to accelerate its decline. The GBP/USD pair now rests just above interim support at the 23.6% Fibonacci extension taken from the October 6th and 11th troughs at 1.5640 with subsequent floors seen lower at the 1.56-figure and 1.5545. Topside resistance is now eyed at 1.5675 backed by the 38.2% extension at the 1.57-handle and 1.5725. Overnight traders will be closely eyeing minutes from the latest BoE policy meeting with emphasis being placed on the vote count to expand the size of the bond purchase program from &pound;200 billion to £275 billion. A unanimous vote would suggests that board members are growing increasingly concerned about exposure to Europe’s debt crisis and domestic growth prospects in the UK and could see the sterling come under substantial pressure.