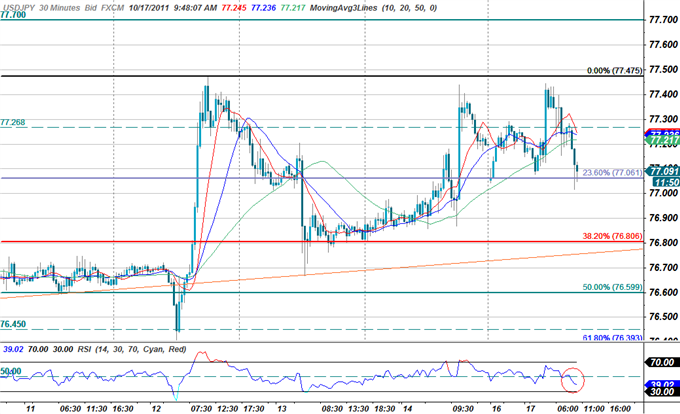 The yen is the top performer against a stronger dollar at the start of trade this week, advancing 0.17% an hour into the US session. Risk appetite is on the defensive today after the much anticipated G20 meeting over the weekend yielded little in the way of a resolution as it pertains to the ongoing debt crisis in Europe. Although officials are expected to lay out a plan by the EU meeting on October 23rd, markets are likely to pare some of the sharp advances made over the past few weeks with investors closing out winning positions early in the week.

Look for the pair to remain under pressure if the risk sell-off gathers pace today with interim support for the USD/JPY rests at the 23.6% Fibonacci extension taken from the September 9th and October 12th crests at 77.06 with subsequent floors seen at the 38.2% extension at 76.80 and 76.60. Note that sharp moves to the downside may be limited on speculation of a possible intervention from the BoJ. Topside interim resistance holds at 77.26 backed by the October 12th high at 77.47 and 77.70. Overnight traders will be eyeing data out of Japan with September sales and machine tool orders on tap. 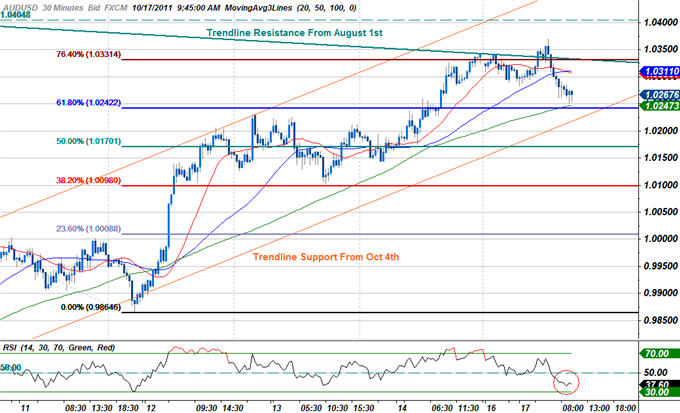 In classic fashion the Australian dollar has come under pressure as investor appetite eased with the high yielder off by more than 0.8% early in the session. The AUD/USD pair now rests just above interim support at the 61.8% Fibonacci extension taken from the October 4th and 11th troughs at 1.0240. An expected break below this level eyes downside targets at trendline support followed by the 50% extension at 1.0170 and the 1.01-handle. Topside interim resistance holds at 1.0290 with stronger resistance eyed at the convergence of the 76.4% extension and trendline resistance dating back to August 1st at 1.0330. Overnight traders will be eyeing RBA minutes from the October 3rd meeting for the central bank’s outlook on growth and future policy shifts. The aussie may come under increasing pressure if the minutes cite further concerns over domestic growth with Credit Suisse overnight swaps already factoring in over 105 basis points in interest rate cuts for the next twelve months.