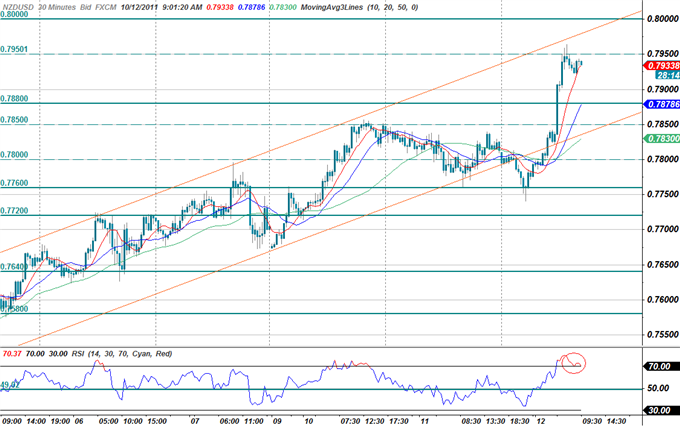 The kiwi is the top performer against a weaker dollar at the open of North American trade today with an advance of 1.85%. A dramatic and substantial improvement in broader risk appetite fueled rallies in higher yielding ‘risk’ currencies like the kiwi and the aussie on hopes that the failed Slovak vote to expand the EFSF bailout fund is only temporary and much stronger than expected industrial production figures out of the Euro zone. The NZD/USD pair broke back above former channel support before encountering stronger resistance at the 0.7950 level. The kiwi is likely to remain well supported so long as investor sentiment continues to improve. A break above interim resistance sees topside targets at the 0.80-figure, backed by 0.8060 and 0.8115. Interim support now rests at 0.7880 with subsequent floors seen at 0.7850, the 0.78-figure, and 0.7760. Overnight traders will be eying data out of the isle-nation with the September business manufacturing performance index and month on month food prices on tap. 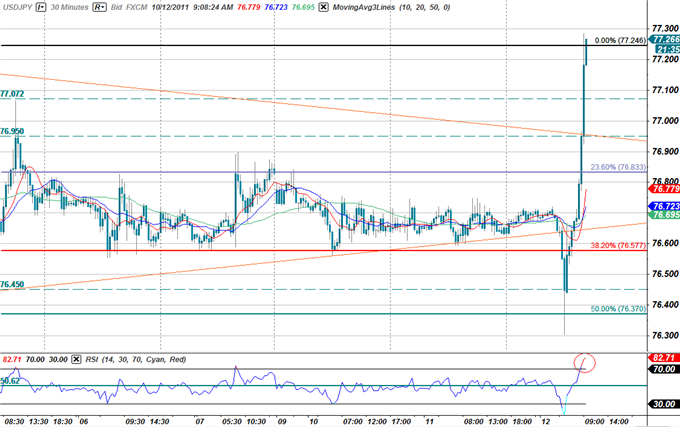 The yen was significantly lower at the open of US trade today with the USD/JPY pair higher by more than 0.80%. The pair has largely remained range bound for the past week in a tight channel between the 38.2% and 23.6% Fibonacci extensions taken from the September 9th and October 2nd crests at 76.60 and 76.80 respectively. A sharp break below interim support saw a tag of the 50% extension at 76.35 before mounting a substantial rally breaking above the October 2nd high at 77.25. The yen is likely to remain under pressure as the recent run-up in investor appetite sees traders jettison lower yielding assets in favor of risk. Topside resistance now stands at 77.40 backed by 77.55 and 77.85. Support for the pair rests at 77.10 with subsequent floors seen at 76.95 and the 23.6% extension at 76.80. This sudden surge in the pair may see a strong pullback at some point should risk appetite go on the defensive again. Overnight investors will be closely eyeing minutes from the most recent Bank of Japan meeting for insight as to the outlook for future policy from the central bank. Highlighting the calendar is the Tertiary Industrial index with consensus estimates calling for a print of -0.3%, down from a previous read of -0.1%. The data has the capacity to add even more pressure on the yen as concerns over the health and stability of domestic economy comes into question.