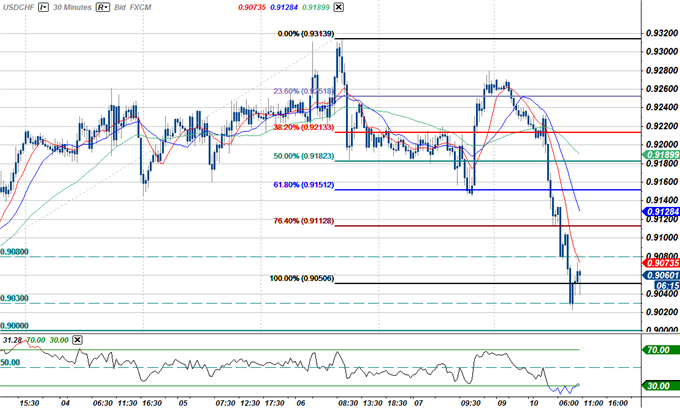 The Swiss franc is the top performer an hour into US trade as the dollar continues to slide against all its major counterparts. Over the weekend French President Nicolas Sarkozy and German Chancellor Angela Merkel met in Berlin to discuss options to deal with the ongoing debt crisis that has gripped the region and threatened financial stability. They announced that they would deliver a plan to re-capitalize the banking system by early November, easing concerns of an imminent default. Although the two provided no details as to the structure of the proposed plan, Merkel did cite determination, “to do the necessary to secure the recapitalization of our banks.”

The announcement was enough to support the risk trade with dollar coming under tremendous pressure early in the week. The swissie advanced more than 2.3% on optimism that a solution to the Greek crisis may be in the works, lessening the probability that the Swiss National Bank will intervene in FX markets. The USD/CHF pair fell as low as 0.9030 before paring some of the gains to settle around the 100% Fibonacci extension taken from the September 22nd and October 6th crests at 0.9050. The move may be slightly overdone here with the pair likely to hold this range. Topside resistance now stands at 0.9080 backed by the 76.4% extension at 0.9110 and the 61.8% extension at 0.9150. Support rests at 0.9030, with subsequent floors eyed at the 0.90-figure, 0.8950, and 0.9820. 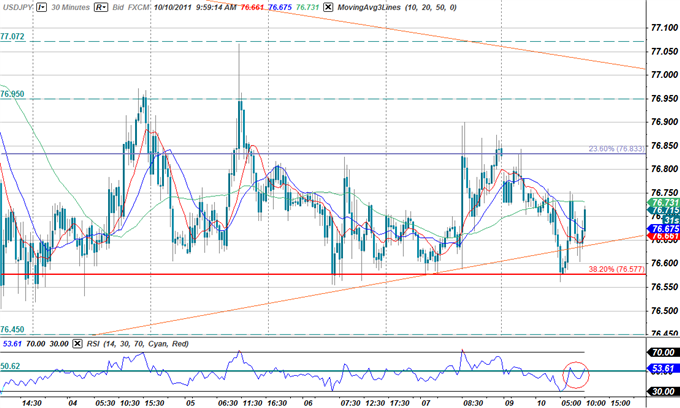 The Japanese yen was the weakest performer, advancing a marginal 0.03 in pre-market trade. Both the yen and the dollar have come under pressure on improved risk appetite with traders jettisoning lower yielding ‘safety’ assets in favor of higher yielding ‘risk’ assets. The pair has remained well supported above the 38.2% Fibonacci extension taken from the October 9th and September 2nd crests at 76.57 since the start of the month, noting downside support targets lower at 76.45 and the 61.8% extension at 76.15. A break above interim support at 76.75 eyes topside targets at the 23.6% extension at 76.85, and the 77-figure. Overnight traders will be eyeing a flurry of data out of Japan with trade balance and consumer confidence data on tap. The August trade balance is expected to show a deficit of ¥692.3B from a previous surplus of ¥123.3B. The data may increase pressure on the BoJ provide further easing measures as the isle-nation struggles to recover from the March disasters. September consumer confidence follows with consensus estimates calling for a read of 37.2, up from a previous print of 37.0.