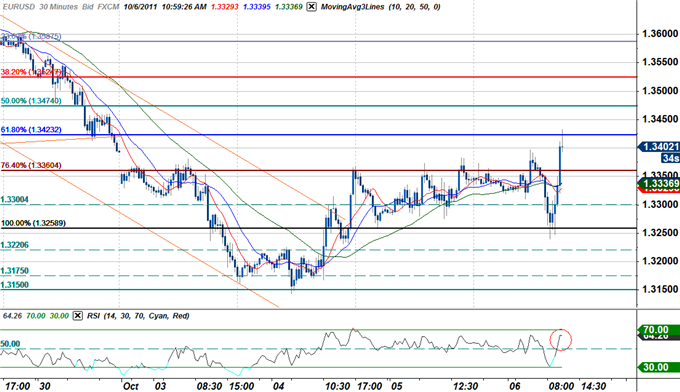 The euro is the top performing currency nearly two hours into North American trade, advancing nearly 0.40% against the greenback. The gains come on the back of the ECB interest rated decision this morning with the central bank leaving interest rates unchanged at 1.50%. Market expectations were slightly weighted in favor or a 25 basis point rate cut with Credit Suisse overnight swaps factoring a 55% chance of a cut. In his last press conference as President of the European Central Bank, Jean-Claude Trichet cited “Intensified” risks to economic growth with the bank announcing it will resume covered-bond purchases and offer year-long loans for banks in an attempt to keep credit flowing. The initial reaction took the single currency lower before rebounding off the 100% Fibonacci extension taken from the September 21st and 28th crests at 1.3260. While markets react to the ECB’s decision to hold rates, the longer term prospects for the region remain clouded with uncertainty as the move to expand easing measures suggests that policy makers see an increased risk of a possible 2008-like credit crunch. 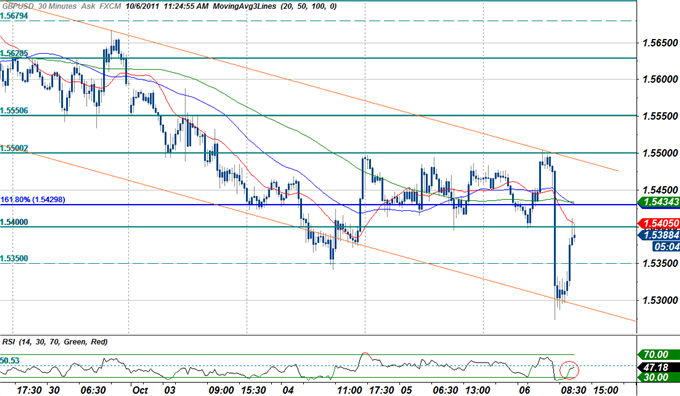 The sterling was the worst performer of the majors early in the New York session, with the pound sliding nearly 0.50% against the greenback. Although the BoE also decided to hold rates at 0.50% today, the Monetary Policy Committee announced it would raise its current asset purchase program to £275 billion from £200billion in an attempt to inject further liquidity into the financial sector. Again the move echo’s concerns about tightening credit conditions which have fueled concerns of a possible double dip recession in the UK. The pound came under tremendous pressure on the announcement with the GBP/USD tumbling 200 pips before rebounding off trendline support dating back to September 28th.

The pound remains vulnerable here as concerns about the health of the domestic economy are rekindled. And although the injection of further liquidity will ease concerns in the interim, the longer-term prospects for the sterling remain weighted to the downside as the expansion of easing measures dilutes the pound. Interim support holds at the lower-bound channel trendline, with subsequent floors eyed at 1.5270 and the 1.52-figrue. Topside resistance holds at the figure backed by the 161.8% Fibonacci extension taken from the May 27th and August 19th crests at 1.6165 and the 1.55-figure. Investors will be eyeing data out of the UK overnight with producer prices on tap. The data is expected to show a modest rise in prices, with the headline month on month figures expected to print at 0.2%, up from a previous read of 0.1% m/m.