Lack of Conviction on Aussie Rally- USD Strength Ahead 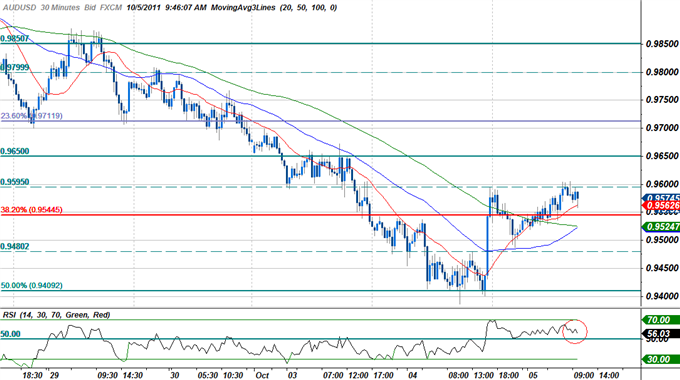 The aussie was the best performer against a stronger dollar an hour into North American trade, with a modest gain of just 0.05%. The Australian dollar remained rather resilient in overnight trade despite a mixed performance in Asia Pacific equity markets. News that European finance ministers had reached a consensus that more action was needed to support the ailed banking sector saw a significant pickup in US session yesterday with risk currencies outperforming in the last hour of trade. Although rumors of a coordinated effort to shore up banks holding distressed sovereign debt in the region was refuted by various officials overnight, markets remained well supported with the aussie holding above the 38.2% Fibonacci extension taken from the September 1st and 27th crests at 0.9545. A stronger than expected ADP employment report helped boost equities into positive territory soon after the open, with risk getting some added support early in the session.

The longer-term outlook on the aussie remains weighted to the downside as interest rate expectations are likely to continue to weigh on the aussie with Credit Suisse overnight swaps still factoring in more than 154 basis points in rate cuts over the next twelve months. Still the pair may remain well supported in intra-day trade with an unlikely breach above interim resistance at 0.9595 eying targets at the 0.9650 and the 23.6% Fibonacci extension at 0.9710. Support rests with the 38.2% extension at 0.9545 with subsequent floors eyed at 0.9480 and the 50% extension at 9410. With no data on tap overnight, price action in the aussie will be largely driven by swings in broader market sentiment. 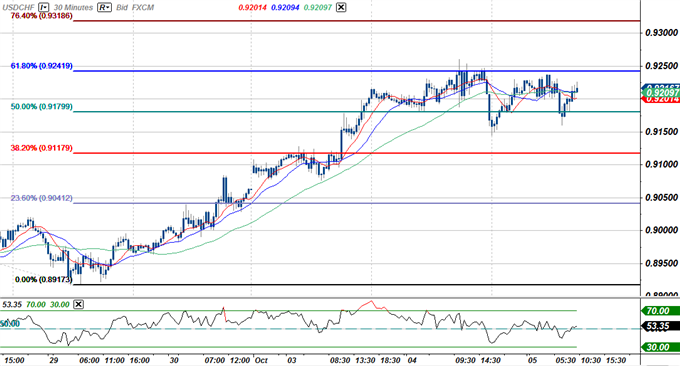 The Swiss franc was the worst performer against the greenback, sliding more than 0.50% in early US trade. The swissie remains under pressure as a boost in risk appetite and rumors that the SNB may raise its price floor on the EUR/CHF exchange rate to as high as 1.25 continue to weigh on the franc. The USD/CHF pair has continued to trade between the 50% and 61.8% Fibonacci extension taken from the September 15th and 29th crests at 0.9180 and 0.9240 respectively. We are neutral on this pair in light of the looming threat of further central bank intervention (whether verbal of physical) noting a breach above the 61.8% extension eyeing the 76.4% Fib at 9320 and 0.9350. A break below interim support sees subsequent floor sat the 38.2% extension at 0.9120 and the 23.6% extension at 0.9040. Overnight traders will be eyeing data out of Switzerland with September CPI data on tap. Consensus estimates call for a headline print of 0.1% m/m, up from a precious read of -0.3% m/m. The year on year figure is also expected to go under the radar with expectations for a print of just 0.3% from a previous read of 0.2% y/y. With inflation expectations well anchored, the swissie is likely to remain under pressure now that the currency has seemingly lost its “safe haven” appeal.