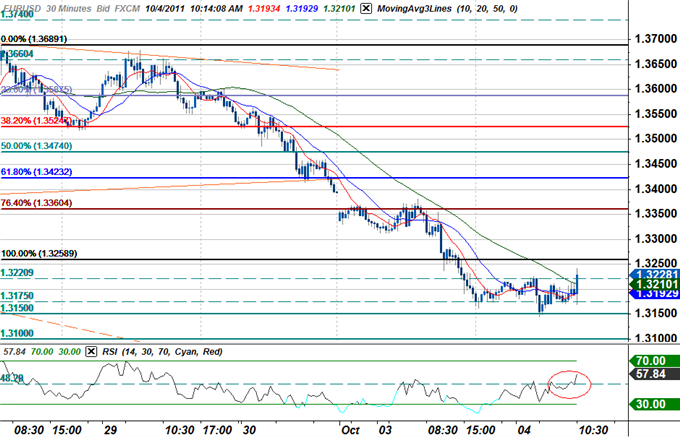 The euro is the top performer against a stronger dollar in North American trade, advancing more than 0.30% early in the session. The single currency has remained rather resilient in the face of a global sell-off in risk which continues to weigh on investor sentiment. The EUR/USD pair encountered strong support at the 1.3150 level in overnight trade an looks to test the 100% Fibonacci extension taken from the September 21st and 28th crests at 1.3255. The outlook for the pair remains weighted to the downside after Greece announced it will not meet its 2011 deficit target required to obtain the next EU/IMF tranche payment. As default concerns now approach critical mass it is likely the pair will come under increasing pressure, with a break below 1.3150 eyeing interim support targets at 1.3120, the 1.31-figure and 1.3050. Topside resistance stands at the 100% Fibonacci extension at 1.3260 with subsequent ceilings eyed at the 1.3310, the 76.4% extension at 1.3360 and 1.3420. Investors will be eyeing data out of the region overnight with German and EU PMI data on tap. 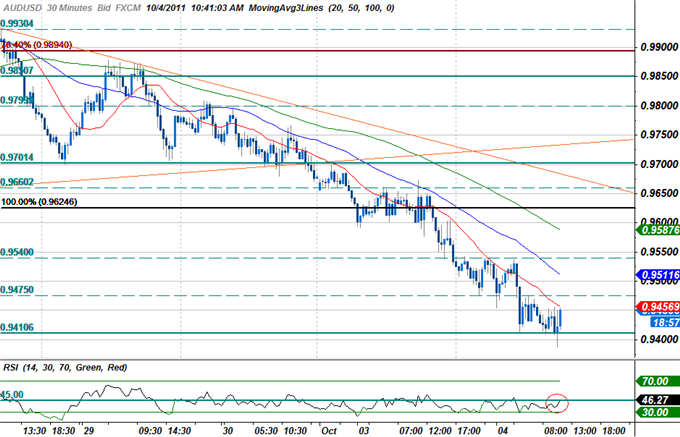 The aussie continues to be the worst performer an hour into US trade with the AUD/USD pair breaking below the 9475 support level in overnight trade. As expected, the RBA left rate unchanged last night at 4.75% citing increased risk future rate cuts should global financial turmoil persist. Central Bank Governor Glenn Stevens went on to state that global markets continue to be “very unsettled,” as growth prospects weaken while inflationary pressures within Australia softened. The remarks saw interest rate expectations fall even further with Credit Suisse overnight swaps now factoring in 161 basis points in rate cuts over the next twelve months. Accordingly, the aussie has gone on the defensive, falling more than 1.15% early in US trade. Interim support for the aussie rests at 0.9410 with subsequent floors seen at the key 38.2% long-term Fibonacci extension taken from the October 2008 and May 2010 troughs at 0.9360 and the 0.93-figure. Topside resistance is now eyed at 9475 backed by 0.9540 and the 96-handle.