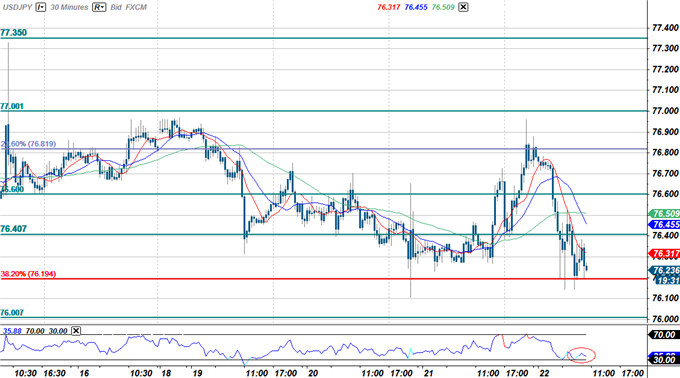 The Japanese yen is the top performing currency against a stronger dollar for the second consecutive day as a massive risk sell-off sweeps across the globe. The FOMC rate decision yesterday saw investors scurry into haven assets after the Fed cited, “significant downside risk” to the domestic economy. In an effort to flatten the yield curve and reduce longer-term rates on mortgages, small business loans, and student loans, the central bank implement the highly criticized ‘operation twist’. Bernanke and company pledged to purchase $400 billion in longer-term maturities while selling that same amount of shorter-term debt in order to maintain the Fed’s current balance sheet. However market participants focused on the statement’s gloomy outlook for future growth, fueling a massive sell-off in equity markets with European stocks down as much as 4.5% in early US trade.

Subsequently, haven currencies like the yen and the greenback have gone on the offensive with the USD/JPY pair trading near all-time lows just above the 38.2% Fibonacci extension taken from the August 4th and September 9th crests at 76.20. A break below this level eyes targets at the 76-figure and the 50% extension at 75.70. Note that as the yen continues to appreciate traders will be testing the BoJ’s resolve and intervention concerns are sure to be rekindled. Topside resistance now stands at 76.40 with subsequent ceilings eyed at 76.60 and the 23.6% extension at 76.80. 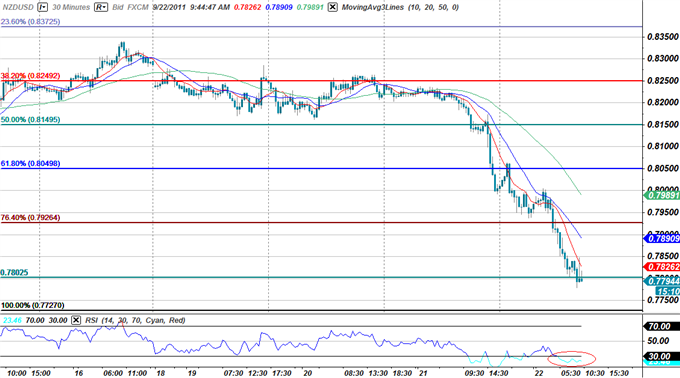 The kiwi was the worst performer against the dollar in early North American trade after breaking below the key 61.8^% Fibonacci extension taken from the August 1st and 31st crests at 0.8050 in overnight trade. Investors will continue to jettison higher yielding, growth linked assets in favor of lower yielding haven assets as concerns over global growth take root. Weaker than expected PMI data out of China and the Euro zone fueled concerns that another global recession may be underway. Accordingly, we remain bearish on ‘risk’ with the currencies like the kiwi, the aussie and the loonie expected to remain under pressure.

The kiwi broke below the 76.4% Fibonacci extension at 0.7925 in European trade before finding solace around the 0.78-handle. Considering the severity of the sell-off in the overnight session, a short-squeeze may see the pair consolidate around these levels noting subsequent floors at the 100% extension, 0.7730 and 0.7675. Interim topside resistance now stands at 0.7850 backed by 0.7925, and the 61.8% Fibonacci at 0.8050.