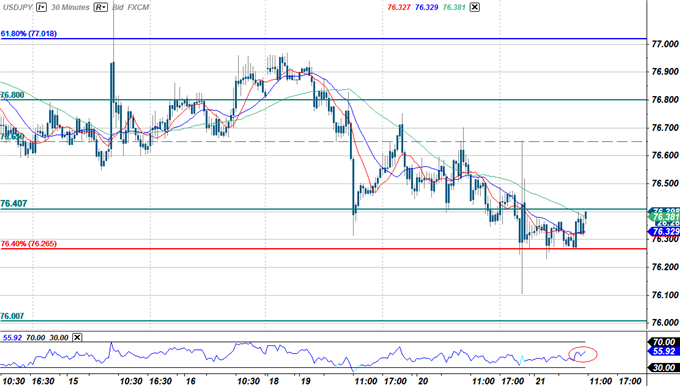 The Japanese yen is the best performer against a stronger greenback early in North American trade. Although the yen advanced only 0.12%, the haven currency has outperformed all the majors which fell against the dollar in pre-market trade. Investors continue to pile into the “safety” of the low yielding currency ahead of the much anticipated FOMC rate decision later today. Market participants are widely expecting Bernanke and company to announce some form of stimulus to shore up the fragile economy. Concerns that the Fed may decide to implement QE3 have fueled flows into the yen as store of value. However it’s highly unlikely the central bank will undertake another round of quantitative easing in its current form and instead may take more unconventional measures such as reducing interest paid on reserves and up the purchase of longer-term maturities in an effort to flatten the yield curve. In any event the dollar is likely to remain well supported so long as the Fed does not increase the size of their already bloated balance sheet.

The USD/JPY pair broke below the 76.40 support level early in pre-market trade before finding solace at the 76.4% Fibonacci extension taken from the July 8th and August 4th crests at 76.25. Solid support rests here noting subsequent floors at all-time low just below the 76-figure. If Bernanke delivers today, the dollar is likely to be bid higher, noting topside resistance is at 76.40, backed by targets at 76.60, 76.80, and the 61.8% Fibonacci extension at the 77-figure. 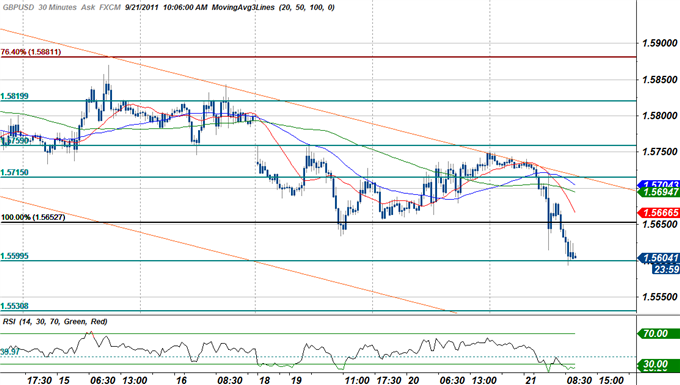 The British pound is the weakest performer an hour into US trade, falling more than 0.80% against the dollar. Fueling the decline was an increasingly dovish tone cited in the BoE minutes which were released overnight. Policy makers were unanimous in their decision to hold the benchmark rate at 0.50% with an 8-1 vote to leave the asset purchases at 200 billion pounds. Adam Posen remains the sole dissenter on the stimulus, calling for the addition of 50 billion pounds in purchases. The overall tone suggests that policy makers remain poised to implement further easing measures to support the faltering recovery.

Subsequently the pound has come under considerable pressure, breaking below the 100% Fibonacci extension taken from the April 27th and August 19th crests at 1.5650 before finding support at the 1.56-figure. A break here risks substantial losses for the pound with downside targets eyed at 1.5540 and the 1.55-figure. Topside resistance now stands at 1.5650 with subsequent ceilings eyed at 1.5715, 1.5760, and 1.5820. The GBP/USD is likely to remain under pressure as the dollar continues its advance ahead of today’s FOMC rate decision.