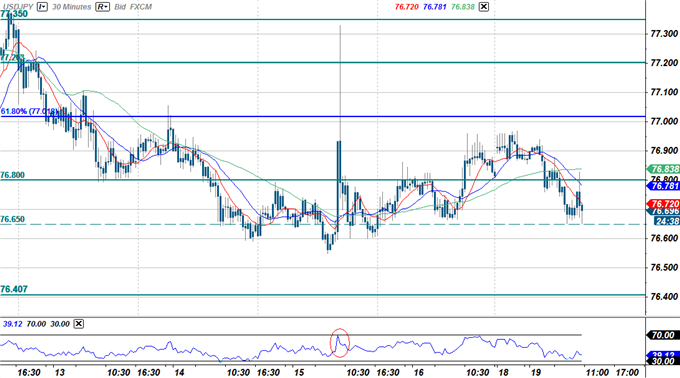 The Japanese yen is the top performer against a stronger dollar early in North American trade. The gains come on the back of a massive sell-off in global equity markets overnight as investors shed risk-assets for the relative safety of the greenback and the yen. European debt concerns continue to plague risk-sentiment after a two-day meeting of EU officials failed to calm markets as speculation that Greece will default continue to take root. The Euro fell to seven-month lows as stocks sold off, with haven flows benefitting the dollar and the yen. The USD/JPY pair broke interim support at 76.80 with subsequent floors seen at 76.65, 76.40, and the 76.4% Fibonacci extension taken from the July 8th and August 1st toughs at 76.25. Topside resistance stands at 76.80, backed by the 61.8% Fibonacci extension at the 77-figure, and 77.20. Overnight traders will be eyeing the economic calendar out of Japan with the July leading index and sales data on tap. The yen is likely to remain well supported in the interim as risk appetite remains subdued. 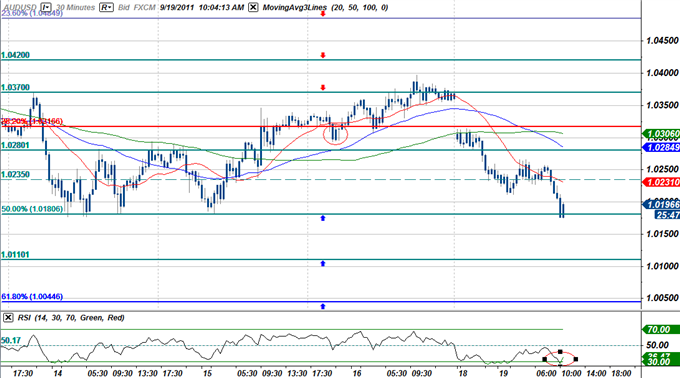 The Australian dollar is the worst performer against a stronger greenback an hour into US trade with the aussie sliding more than 1.6%. As tensions in Europe approach critical mass traders have continued to seek refuge in lower-yielding ‘safe’ haven assets putting the aussie back on the defensive. The AUD/USD pair tested interim support at the 50% Fibonacci extension taken from the August 1st and September 1st crests at 1.0180 early in the session. As noted in Thursday’s AUD/USD Scalp Report, a break below this level eyes targets at 1.0110, the 61.8% extension at 1.0045, and parity. Topside resistance holds at 1.0235 backed by 1.0280 and the 38.2% extension at 1.0315. The RBA minutes are released overnight with trades looking to Governor Glenn Steven’s for clues as to the central bank’s growth outlook. Credit Suisse swaps are now factoring in a 94% chance the RBA will move to cut interest rates at the next policy meeting with twelve month expectations now factoring up to 147 basis points in cuts. The Aussie is likely to remain under pressure ahead of the release as the investors continue to shed risk ahead of the highly anticipated FOMC rate decision on Wednesday. Traders will be lending a keen ear to Chairman Bernanke’s remarks as speculation for another round of quantitative easing continue to take root.