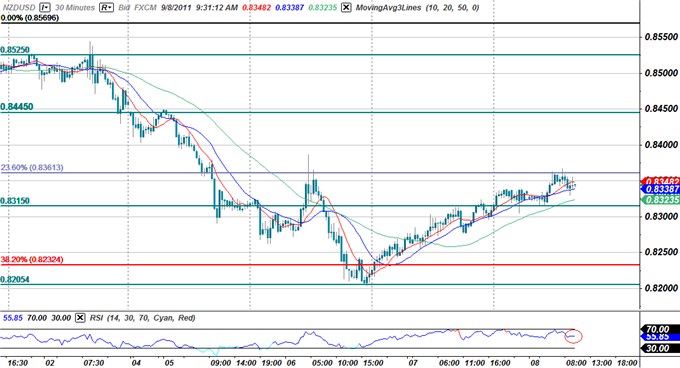 The kiwi is the top performer against a stronger dollar early in the North American trade with an advance of more than 0.31%. Employment data out of Australia overnight showed the continent-nation had lost 9.7K jobs in August, missing expectations for a gain of 10K. In turn investors seeking yields diverted flows into the kiwi as expectations that the Reserve Bank of Australia will need to cut interest rates rose. Credit Suisse overnight swaps are now factoring in an 83% chance the RBA cut rates by 25basis points at the next meeting, with twelve month expectations calling for 128basis points in further rate cuts. The NZD/USD broke above the 0.8315 interim resistance level in overnight trade before tagging the 23.6% Fibonacci extension taken from the July 31st and August 31st crests at 0.8360. A breach here eyes targets at 0.8445, 0.8525, and 0.8570. Interim support rests at 0.8315 with subsequent floors seen at 0.8260, the 38.2% Fibonacci extension at 0.8232, and 0.8205. 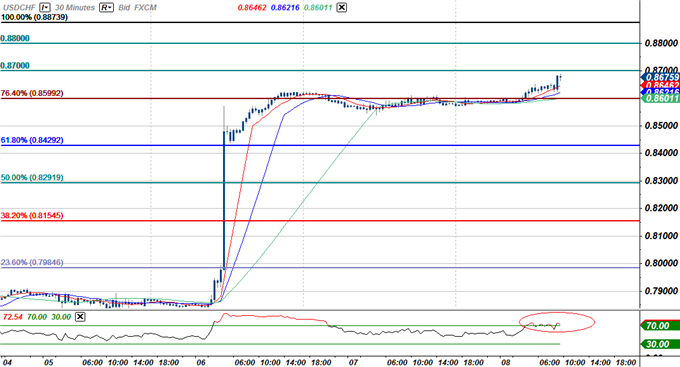 The Swiss franc resumed its descent in European trade today after the Bank of England and the European Central Bank left rates unchanged at 0.50% and 1.50% respectively. Increasingly dovish remarks from ECB President Jean-Claude Trichet saw investors jettison the euro and the swissie with the greenback the primary beneficiary of haven flows now. Trichet cited that expectations for moderate growth were, “subject to particularly high uncertainty and intensified downside risks.” Highlighting his dovish stance were comments about inflation expectations where he noted that the, “governing council views the risks to the medium-term outlook for price developments as being broadly balanced.” With the swissie effectively pegged to the euro at 1.20, draw downs in the single currency are likely to weigh on the swissie as well with the dollar advancing more than 1.2% against the franc in early US trade. The USD/CHF pair continues to encounter some headwinds ahead of the 0.87-handle, with a breach above eyeing topside targets at 0.88-figure and 0.8870. Interim support rests at the 76.4% Fibonacci extension taken from the 0.86 and is backed by the August 9th and September 2nd troughs at the 0.86-handle, backed by the 61.8% extension at 0.8430 and 0.8290. The swissie is expected to remain under pressure here as the European crisis continues to approach critical mass.