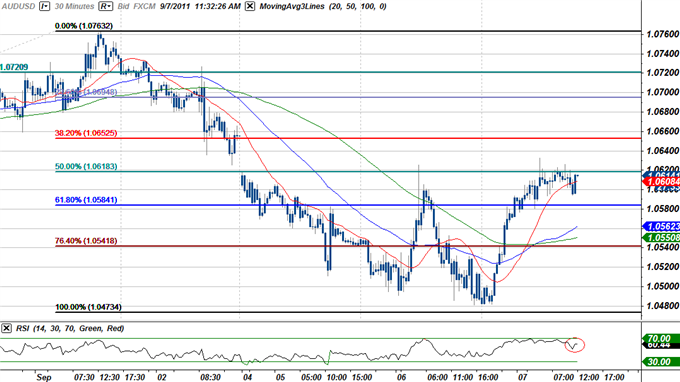 The Australian dollar remains the top performer against a weaker dollar at the open of North American trade, advancing more than 1.3% early in the session. A rebound in risk has benefited the high yielders with equity markets surging across global markets overnight. Fueling the aussie’s rally was GDP data out of Australia which surprised to the upside with a print of 1.2% q/q, besting calls for a read of just 1.0% q/q. The year on year figure also topped estimates with a print of 1.4%, versus consensus estimates of 0.7% y/y. Subsequently the aussie has remained well supported above the 23.6% Fibonacci extension taken from the July 27th and September 1st crests at 1.0490. Topside resistance holds at the 50% Fibonacci extension taken from the August 17th and September 1st crests at 1.0620 with subsequent ceilings eyed at 1.0650 and the 1.07-figure. A break below the 23.6% extension eyes support levels at 1.0430, the 38.2% extension at 1.0325, and the 50% extension at 1.0190. Overnight traders will be eyeing employment data out of the continent nation, with consensus estimates calling for the employment sector to have added 10K jobs with the unemployment rate holding steady at 5.1%. The data follows a dismal print last month that showed a fractional contraction in the employment sector. The aussie is likely to remain well supported at these levels so long as the broader market sentiment remains positive. 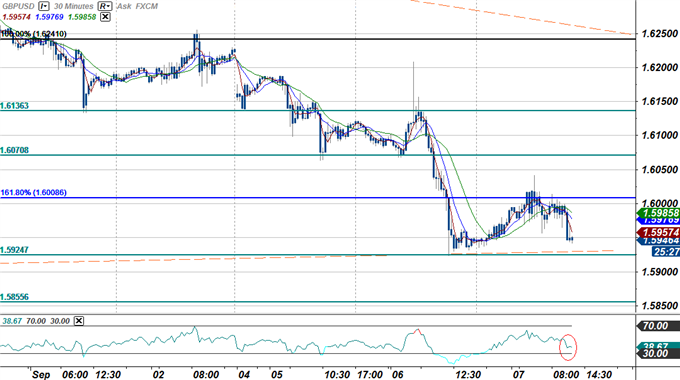 The sterling is virtually unchanged an hour into US trade after failing to break above the 161.8% Fibonacci extension taken from the August 7th and 19th crests at the 1.60-figure earlier in the session. The sterling is likely to remain under pressure despite dollar weakness after weaker than expected industrial production figures fueled concerns that the Bank of England will need to implement further stimulus measures to support the ailed economy. The data follows a string of disappointing prints from the UK, all suggesting that the economy remains on shaky ground. Interim resistance holds at the 1.60 with a breach eyeing subsequent ceilings at 1.6070, 1.6135 and the 1.62-handle. Downside targets are held at 1.5925 backed by 1.5855 and the 1.58-figure. The sterling is likely to hold its current range ahead of the BoE interest rate decision on tap overnight.