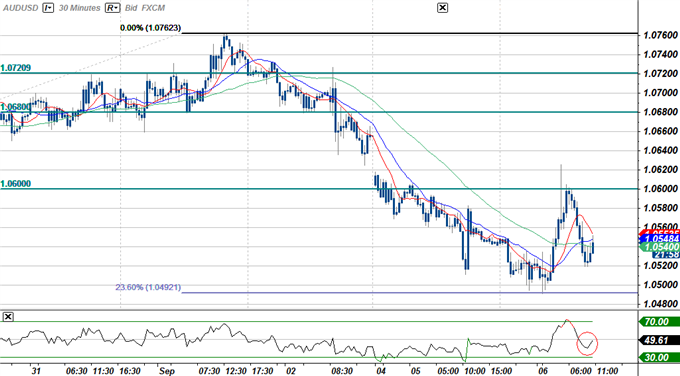 The greenback was stronger across the board at the open of North American trade, with the Australian dollar suffering the least with a loss of just 0.18%. Although risk appetite remains on the defensive after an unprecedented move by the Swiss National Bank, the aussie remained supported after the Reserve Bank of Australia left interest rates unchanged at 4.75% citing unstable financial markets and weaker growth prospects both domestically and globally. The central banks was less dovish then expected however with Governor Glenn Stevens noting that, “investment in the resources sector is picking up very strongly and some related service sectors are enjoying better-than-average conditions.” The governor went on to cite concerns about the, “medium-term outlook for inflation,” stating that the, “key questions will be the extent to which softer global and domestic growth will work, in due course, to contain inflation,”

The aussie surged on a release, with the AUD/USD pair testing interim resistance at the 1.06-handle before easing back to 1.0520 an hour into US trade. Interim support rests here with subsequent floors eyed at the 23.6% Fibonacci extension taken from the July 27th and September 1st crests at 1.0492, 1.0430, and the 38.2% extension at 1.0325. Despite the high-yielders resilience today amid a continued risk sell-off, it’s likely the aussie will remain under pressure as investors remain reluctant to take on risk. Topside resistance holds at the figure, backed by 1.0680, 1.0720, and 1.0760. Overnight traders will be lending a keen ear to remarks made by RBA Governor Glenn Stevens on the assessment of the domestic economy, with GDP data following soon after. Consensus estimates call for 2Q GDP to print at 1.0% q/q, up from a previous contraction of 1.2%, with the year on year figure expected to ease to 0.6% from a previous read of 1.0% y/y. 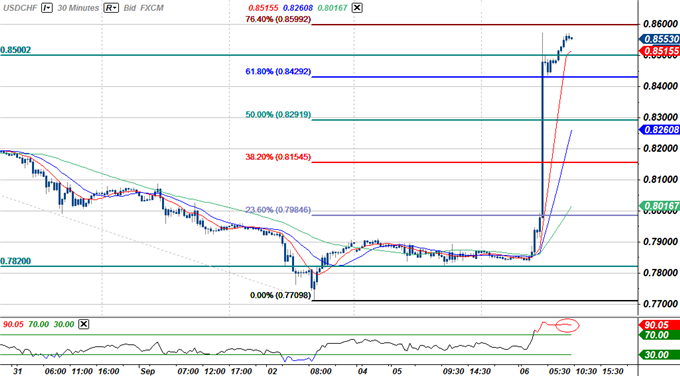 The franc plummeted in pre-market trade, sliding a staggering 8.03% against a stronger greenback. Overnight the Swiss National Bank set a minimum exchange rate for the EUR/CHF at 1.20 citing that the “current massive overvaluation of the Swiss franc poses an acute threat to the Swiss and carries the risk of a deflationary development”. The central bank pledged to “buy foreign currencies in unlimited amounts” to defend the targeted exchange rate with the “utmost determination.” The franc tumbled against across the board, highlighted by declines against the dollar and a 8.41% decline against the high-yielding aussie. The move represents an act of desperation from the SNB and bodes well for the greenback as renewed concerns about the European debt crisis will now see haven flows diverted back into the dollar.

The USD/CHF pair soared more than 600pips before encountering some headwinds ahead of the 76.4% Fibonacci extension taken from the August 9th and September 2nd troughs at the 0.86-figure. Interim resistance holds here with subsequent ceilings eyed at 0.8670 and the 0.87-handle. Interim support holds at the 0.85-figure backed closely by the 61.8% extension at 0.8430 and 0.8290.