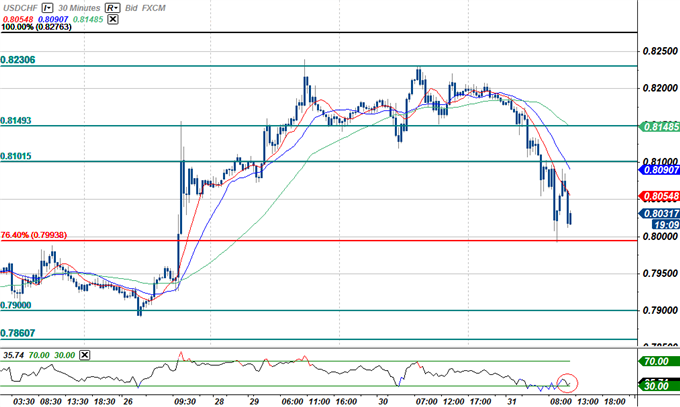 The Swiss franc is the top performer against the greenback mid-day in North American trade, advancing more than 2% on the session. The Swiss National Bank refrained from remarks about possible steps to stem the rapid rise of the swissie today, easing concerns of further SNB intervention. The central bank has continually disseminated rhetoric about the currency’s rise for the past three weeks, leaving traders reluctant to move on the franc. The USD/CHF pair broke below interim support in pre-market trade before finding solace just above the 76.4% Fibonacci retracement taken from the July 19th decline at the 0.80-figure. This level is likely to hold in for now as it provided strong resistance for nearly a month before breaching the extension last Friday, noting subsequent floors lower at 0.7950, the 0.79-handle, and 0.7850. The franc is unlikely to see substantial gains past this level as investors will remain cautious not to push the swissie to high too fast on concerns the SNB will step back in to curb market appetite. Topside resistance holds at the 0.81-figure, backed by 0.8150 and 0.8230. Overnight traders will be eyeing data out of Switzerland with July retail sales and the SVME- PMI report on tap. 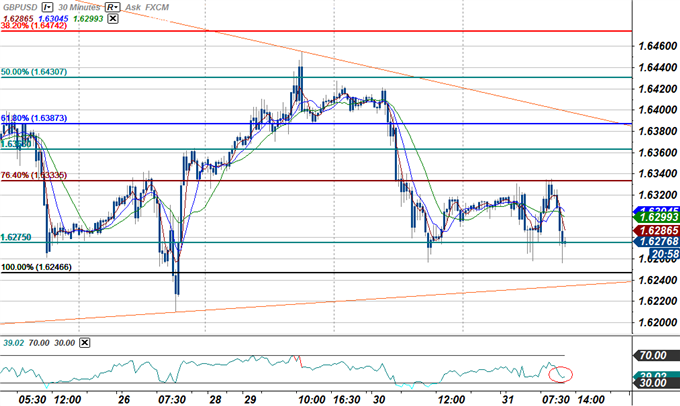 The sterling remains the worst performer for the second consecutive day after breaking below the 76.4% Fibonacci extension taken from the August 7th and 19th crests at 1.6335 yesterday. This level has continued to provide strong resistance for the pound which looks to break below interim support at 1.6275 in New York today. A break here sees interim targets at the 100% extension at 1.6246 and lower bound trendline support of the wedge formation that has held the pair since August 10th. A downside break of this formation eyes targets at the 1.62-figure and 1.6160. Topside resistance holds at the 76.4% Fib extension with a breach eyeing subsequent ceilings at the 61.8% extension at 1.6385 and the 50% extension at 1.6430. Investors get an update on the UK housing market overnight with nationwide house prices for the month of August on tap. Prices are expected to be flat on a month on month basis, with estimates calling for prices to rise 0.4% y/y.