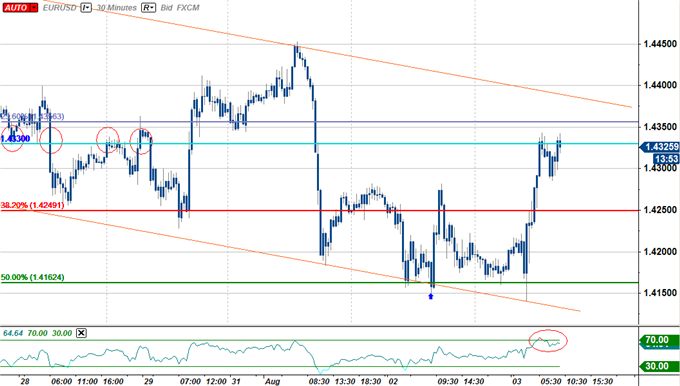 The euro topped the performance charts coming into the US session, rallying 0.87% against the dollar. The advance comes on the back of stronger-than-expected retail sales figures which grew 0.9% m/m, besting calls for a print of just 0.5% m/m. The euro encountered strong support yesterday at the 50% Fibonacci extension taken from the July 3rd and 26th peaks at 1.4160 before re-testing the 1.4330 level. This level has continued to be of significance over the past few weeks with breaks seeing substantial moves on either side. A hold at 1.4330 sees downside targets eyed at the 38.2% Fib extension at 1.4250, backed by the 50% extension at 1.4160 and the lower-bound trendline support, currently at 1.4130. A topside break sees interim resistance at the upper-bound trendline resistance, currently at 1.4380, backed by the 1.44-handle and 1.4450. Overnight traders will be closely eyeing German factory orders and the ECB rate decision. Although the central bank is widely expected to keep rates unchanged at 1.50%, investors will be lending a keen ear to the accompanying remarks made by central bank president Jean-Claude Trichet for clues as to the bank’s outlook for future growth. 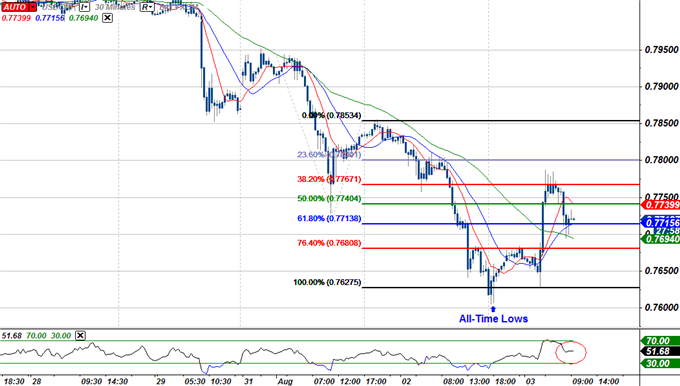 The Swiss franc plummeted in overnight trade, falling more than 1.3% against the greenback after the Swiss National Bank unexpectedly cut interest rates, “as close to zero as possible.” The central bank said it will increase the supply of francs to the money markets in an attempt to curb the “massively overvalued” franc which has surged nearly 10% against the euro over the past two months. The haven currency has continued to see inbound flows as concerns over the European debt crisis and global growth prospects saw traders seeking refuge in the low yielding franc. The swissie rebounded off record highs against the dollar before encountering resistance at the 38.2% short-term Fibonacci extension taken from the July 31st and August 1st crests at 0.7780. Interim support for the USD/CHF pair rests at the 61.8% extension at 0.7715, with subsequent floors eyed at 0.7680 and the 100% Fib extension at 0.7630. Topside resistance holds at 0.7780 backed by the 23.6% extension at the 0.78-figure and 0.7850. The move is likely to be short lived however as ongoing concerns about the health of the global recovery continue take root, with investors reluctant to take on risk.