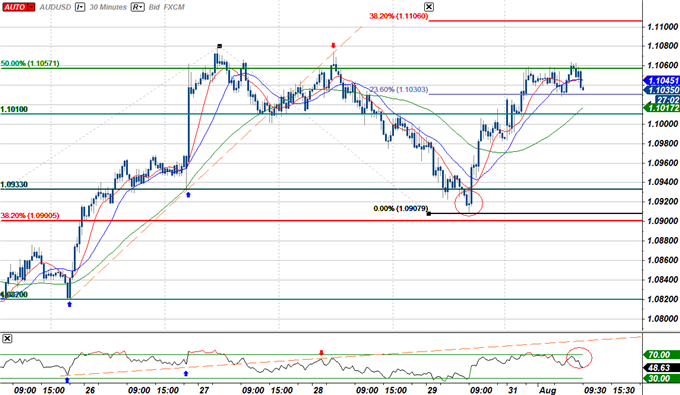 The Australian dollar tops the performance charts at the start of North American trade, advancing 0.43% against the greenback. News that lawmakers have come to a consensus on a deficit reduction plan that will raise the debt ceiling saw market sentiment improve with a pickup in risk appetite favoring the high yielding Aussie. The AUD/USD pair held below the 50% long-term Fibonacci extension taken from the March 16th and June 27th troughs at 1.1060, where interim resistance now stands. A topside break eyes targets at the July 27th high at 1.1080 backed by the 38.2% short-term Fibonacci extension taken from the July 18th and 29th troughs at 1.1100-handle. Interim support holds at the 23.6% extension at 1.1030 with subsequent floors eyed at 1.1010, 1.0960, and 1.0930. Investors will be closely eyeing a flurry of data out of Australia overnight with the house price index, building approvals, and the commodity price index on tap. Highlighting tonight’s economic docket is the Reserve Bank of Australia interest rate decision at 4:30GMT. While the central bank is widely expected to leave rates unchanged at 4.75%, traders will be lending a keen ear to the accompanying remarks as a stronger domestic currency continues to weigh on the export economy. While markets had anticipated up to 55 basis points in cuts from the RBA last week, expectations significantly shifted after CPI figures topped estimates, fueling inflation concerns. As it stands, Credit Suisse overnight swaps now are factoring just 16 basis points in cute over the next twelve months. 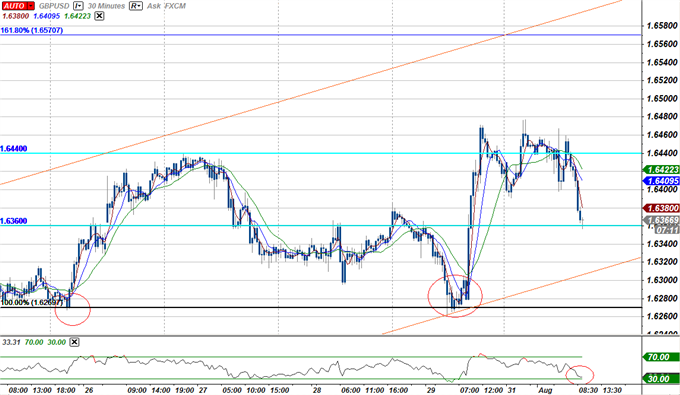 The sterling is the weakest of the majors at the start of US trade today, sliding more than 0.50% against the dollar. Weighing on the pound was a weaker than expected PMI manufacturing print which came in at 49.1, missing calls for a read of 51.0. The sterling continues to pare the gains seen last week as the dollar plummeted on concerns that the US may default for the first time in the nation’s history. Interim support rests at 1.6360, with a likely break eyeing downside targets at 1.6320, the 1.63-figure, and the 100% Fibonacci extension taken from the March 23rd and July 12th troughs at 1.6270. Topside resistance now stands at the 1.64-handle, backed by 1.6440, and 1.6470. Overnight traders will be eyeing the construction purchasing manager’s index with consensus estimates call for a slight easing to 53.1, down from a previous read of 53.6.