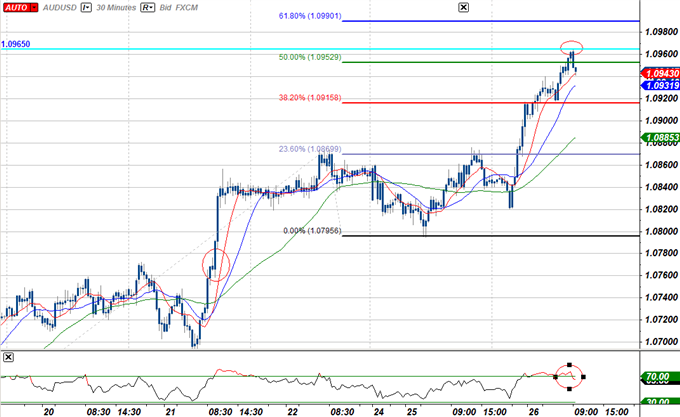 The Australian dollar is the best performer against for the second consecutive day, advancing 0.90% against the greenback an hour into US trade. The Aussie surged in overnight trade after the 2Q CPI report showed inflation topping estimates with a read of 3.6% y/y, besting calls for a print of 3.3% y/y. The data saw interest rate expectations move dramatically as the RBA will be less inclined to cut rates as risking inflationary pressures take root. Officials also continue to give an upbeat outlook for the continent nation, citing that growth should continue to strengthen in the second half of 2011. Credit Suisse overnight swaps are now factoring in only 23 basis points in rate cuts for the next twelve months. This has fallen substantially from late last week when investors were looking for more than 50 basis points in cuts. The AUD/USD made fresh record highs at 1.1079 in overnight trade before paring gains back below the 50% Fibonacci extension taken from the March 16th and June 27th troughs at 1.1060. Interim resistance holds here with subsequent topside targets eyed at the 1.11-handle and the 61.8% Fib extension at 1.1210. Support rests at the 1.0965 backed closely by 1.0930 and the 38.2% Fib extension at the 1.09-figure. With risk appetite heavily on the defensive early in the session, the Aussie is expected to ease off recent highs as the dollar gets a reprieve from the heavy pressure seen recently. Aussie losses will likely be limited however as traders remain poised to jettison the dollar on concerns over a possible US default. 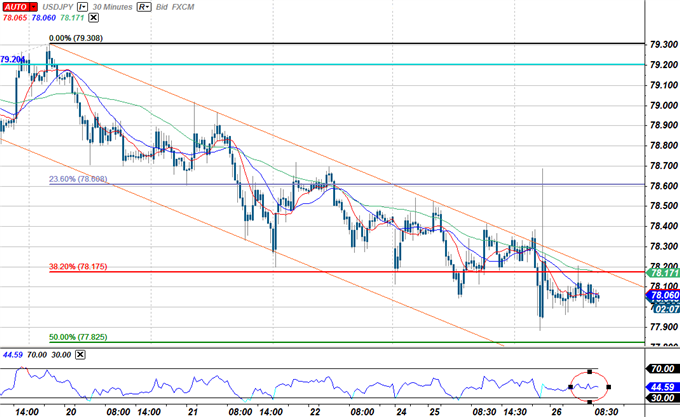 The euro fell from three-week highs after encountering strong resistance below the significant 1.4550 level. The dollar’s recent relief rally may be short-lived as lawmakers struggle to reach a consensus on raising the debt limit and reducing the nation’s deficits. The euro tumbled more than 0.50%, breaking below the lower bound trendline support of the ascending channel dating back to July 18th. Downside targets are seen at the 23.6% short term Fibonacci extension at just below the 1.44-handle, backed by 1.4360 and the key 1.4330 level. Topside interim resistance holds at the 50% extension at 1.4470 backed by the 1.45-figure, and 1.4550. The single currency is expected to continue to fall as doubts about the effectiveness of the newly implemented measures announced at least week’s summit continue to fuel speculation about the sustainability of the region. Overnight traders will be eying economic data out of the Eurozone with German unemployment and a host of EU confidence surveys on tap.