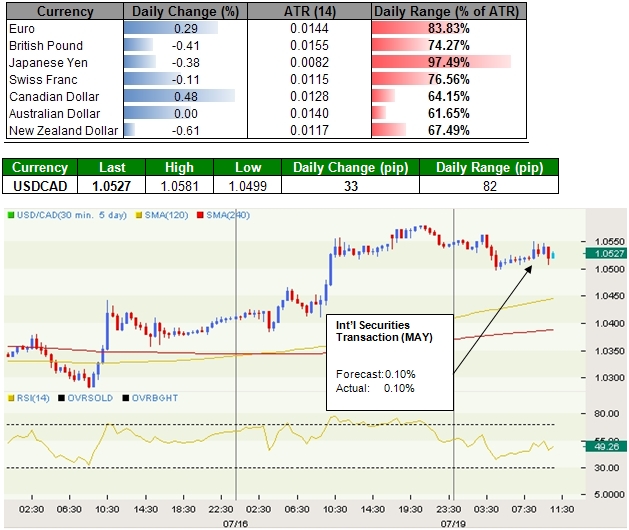 The Canadian dollar pared the sharp decline from the previous week and is the best performing currency against the greenback on Monday, and the currency may continue to appreciate throughout the week as the central bank is widely expected to normalize monetary policy further this month. The USD/CAD is 30+pips lower on the day after moving only 64% of its average true range, and the exchange rate may continue to trend lower going into the Asian trade to fill-in the gap from the 120-SMA at 1.0445. Moreover, with the near-term rally in the dollar-loonie failing to retrace the decline from the monthly high (1.0676), the recent developments favors a bearish outlook for the pair market participants expect the Bank of Canada to raise borrowing costs for the second consecutive month in July. A Bloomberg survey shows all 20 of the economists polled forecast the BoC to hike the benchmark interest rate to 0.75% from 0.50% in the previous month, while investors are pricing a 96% chance for a 25bp rate hike, and comments following the rate decision will certainly spark increased volatility in the exchange rate as market participants weigh the prospects for future policy. 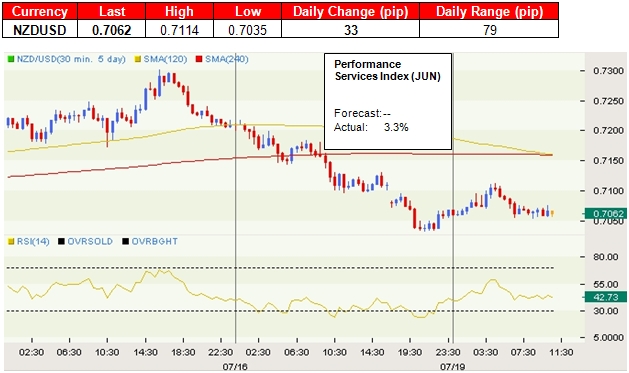 The New Zealand dollar continued to retrace the advance from earlier this month, with the exchange rate slipping to a low of 0.7035, and the high-yielding currency may continue to trend lower throughout the day as investors scale back their appetite for risk. The NZD/USD is 30+pips lower from the open after moving 67% of its daily ATR, and the exchange rate may continue to push lower going into the Asian trade as the 120-SMA (0.7159) crosses below the 240-SMA at 0.7160. As a result, we may see the kiwi-dollar work its way lower and test the 100-Day SMA at 0.7016 for short-term support, but a break below would expose the 50-Day SMA at 0.6939. Nevertheless, the Reserve Bank of New Zealand is widely expected to raise the cash rate later this month, with market participants speculating for a 25bp rate hike to 3.00% from 2.75% in the previous month, and interest rate expectations could spark a bullish reaction in the kiwi-dollar as investors weigh the prospects for future policy.