In this week’s webinar on IG Client Sentiment (IGCS), I discussed the outlook for the Japanese Yen and Swiss Franc against the US Dollar. IGCS is typically a contrarian indicator. For detailed analysis, check out the recording of the session above, where I discussed how to use IGCS in a trading strategy as well as covering the fundamental outlook for USD/JPY and USD/CHF.

The IGCS gauge implies that about 48% of retail investors are net long USD/JPY. Upside exposure has decreased by 1.55% while increasing 20.63% over a daily and weekly basis respectively. The fact traders are net short suggests prices may rise. But, recent changes in sentiment warn that USD/JPY could have more room to extend losses. 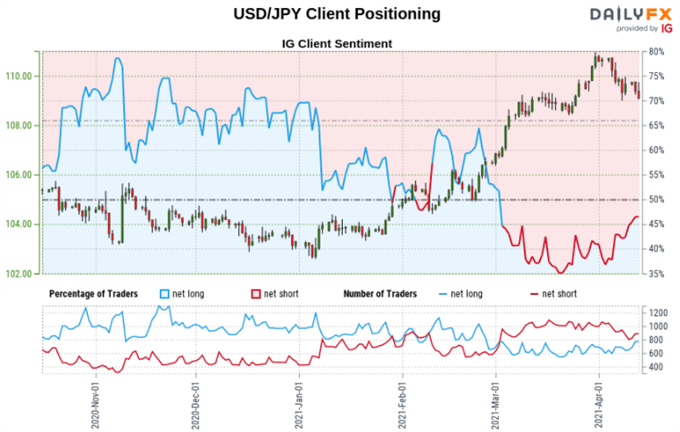 USD/JPY recently pierced through the former 109.38 – 109.85 resistance zone, extending March’s top. The pair took out the 20-day Simple Moving Average (SMA) and is now eyeing the March 23rd low. Beyond that, the 50-day SMA could come into play as a pivotal support point. Bouncing off the latter could open the door for the Japanese Yen to extend losses from the beginning of this year.

The IGCS gauge implies that roughly 73% of retail traders are net long USD/CHF. Upside exposure has increased by 2.33% and 32.90% over a daily and weekly basis respectively. The fact that traders are net long suggests prices may fall, and the combination of recent changes in sentiment offers a stronger bearish contrarian trading bias. 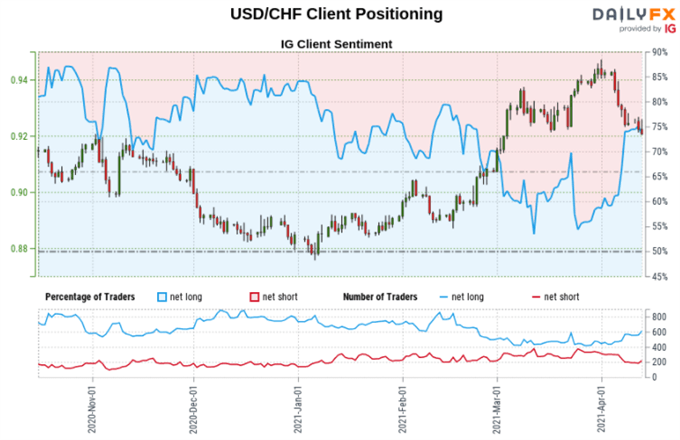 From a technical standpoint, USD/CHF seems increasingly vulnerable to extending recent losses. The Swiss Franc has taken out the 20-day SMA and has since confirmed a daily close under key support at 0.9214. That has placed the focus on the 50-day SMA where it could come into play as pivotal support. Otherwise, taking it out subsequently exposes the midpoint of the Fibonacci retracement at 0.9115.