Bitcoin prices have continued to edge higher, threatening to break through the upper bound of the symmetrical triangle discussed in Wednesday’s analysis. Despite the recent consolidation of price action, bulls have managed to regain control of the trend, driving speculation that a resistance break and possibly a fresh all-time high may be close by.

With institutional interest for major cryptocurrencies on the rise, speculation and crowd psychology remain the dominant catalysts for price action, supporting the rally that has prevailed since last year.

After reaching a record high of $61,759 just last month, both bulls and bears have struggled to gain traction, pushing price action into a zone of confluency formed by key Fibonacci levels of the 2021 move. With the recent consolidation of prices between the 14.4% Fibonacci retracement level of $56,920 and psychological resistance of $60,000 ,a break above or below these levels increases the probability of a breakout in the foreseeable. 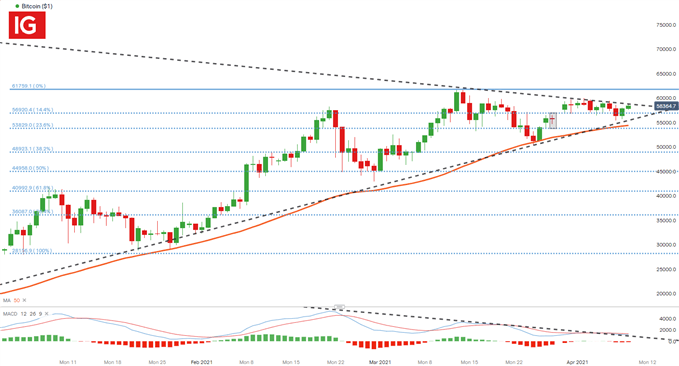 Despite recent MACD Divergence suggesting that upward momentum may be losing steam, prices continue to trade above the 50-period moving average, indicating that the upward trajectory remains intact, at least for now.

But, in order for bulls to gain traction, they will first need to break above psychological resistance of $60,000, a hurdle that continues to hinder their progression. However, should they succeed, the March high is very nearby and may be tested soon after, setting the stage for yet another record high.

On the other side of the matter, if selling pressure increases, bears will need to drive prices below support of $56,920 with the next level of interest coming into play at the 23.6% retracement of the above-mentioned move, currently residing at $53,829.