The British Pound appears to have found support at a prior area of resistance from a descending trendline set from the October swing high versus the Australian Dollar. So far this month, GBP/AUD is down near 0.50%. If the current pace holds, it will mark the first monthly loss since December. However, the currency pair’s technical posture appears bullish at the current view.

March ended with a bullish crossover between the 20- and 200-day Simple Moving Averages (SMA), with a break higher in price immediately following. The 20-Day SMA now appears to be helping to guide prices higher and may continue to do so. Moreover, prices have ranged within an ascending channel since January.

A bearish MACD cross below the centerline may weigh on short-term action, along with the 23.6% Fibonacci retracement level – which also coincides with the psychologically important 18000 level. That said, the 200-day SMA is on the verge of turning higher, signaling a shift in long-term momentum. Overall, GBP/AUD looks ready to continue drifting higher. 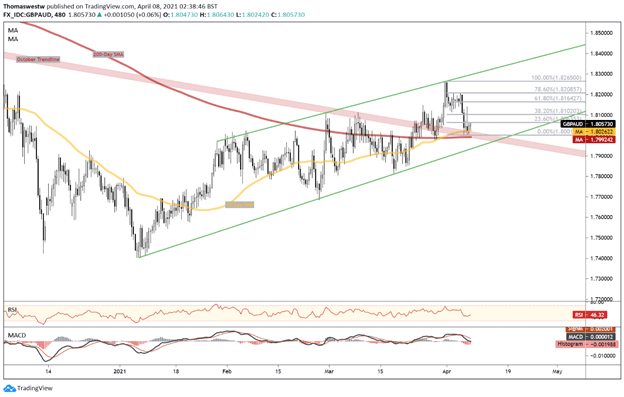 GBP/CAD’s technical posture appears neutral, but an incoming bearish SMA crossover may lead to some downward pressure on the currency pair if the 20-day SMA (yellow line) moves below the 200-day SMA (red line). So far this month, the Pound has made a slight appreciation versus the Canadian Dollar. This follows a sharp move lower in March, one that ended five consecutive monthly gains.

A speedy move higher may avert a bearish SMA crossover, but a descending trendline from the February swing high is an area of resistance to watch out for. However, the MACD recently crossed below the signal line and appears on track to fall below its center line, a bearish signal. A drop lower would see potential support at the 1.7171 – 1.7190 range, where prices previously saw support earlier this year at various points. 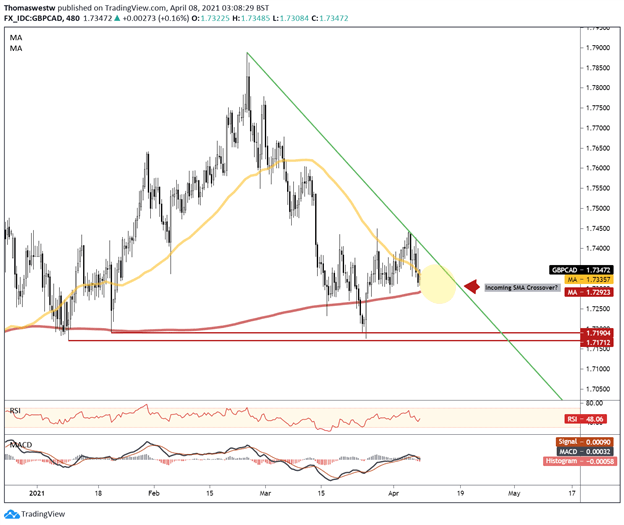 In GBP/CHF, the Sterling has retraced back to a supportive trendline set from December after some upside momentum through March pressured prices higher. The Franc’s progress as of late has seen that trendline step back into the fold to offer support along with the 61.8% Fibonacci retracement level from the February to April move.

MACD is at its most negative level since December but now appears to be moderating although still oriented lower. The Relative Strength Index (RSI) has emerged higher from oversold conditions as GBP/CHF found support. The rising 50-day Simple Moving Average may soon offer an additional level of support, with the key SMA rising through the ascending trendline. 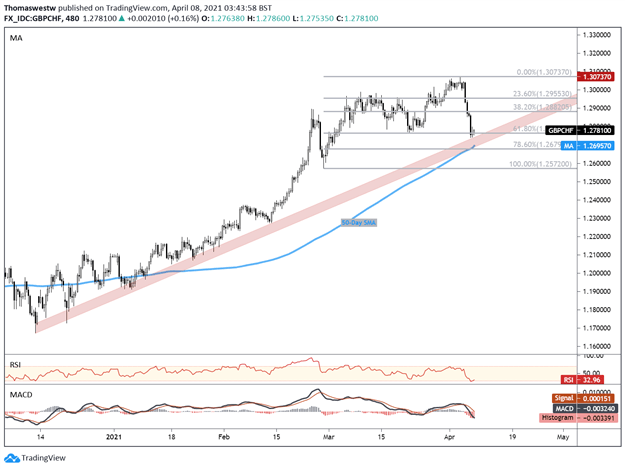