The New Zealand Dollar saw a dreadful performance against the Canadian Dollar through March, dropping nearly 5%, its worst monthly performance in years. NZD/CAD breached its 200-day Simple Moving Average (SMA) last month as broad-based Loonie strength drove prices lower. The technical view on price action may present an opportunity for some upside, however.

NZD/CAD’s bounce appears to have formed a Double Bottom pattern after completing two evenly distributed troughs. Although the range between the peak and troughs is less than ideal, the pattern holds valid. Three major levels are in play to the upside: trough resistance, trendline resistance, and the 200-day SMA.

That said, upside momentum looks primed to carry prices higher, with the Relative Strength Index (RSI) and MACD both trending higher. A deflection lower off of trendline resistance (green line) or trough resistance (purple line) would likely see prices return to the bottoms, near the 0.8750 level. On balance, NZD/CAD is in a fragile position, and the next week of price action may see a directional break in either direction. 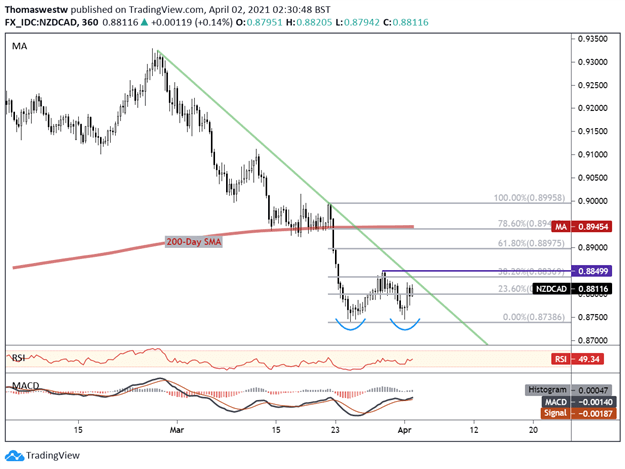 NZD/CHF has been trending higher over the past week after finding support at its 50-day SMA, which offered support last in January before the pair made a run higher throughout February. A bullish MACD cross from earlier this week appears to be helping propel prices higher. However, the Kiwi will face a test against the Franc in the coming days if the current pace higher persists.

Trendline resistance from the February swing high may turn prices lower, as seen in March’s price action. A break above that level would likely lead to further upside, with a potential test of the February high. Alternatively, a move lower would aim for support at the supportive 50-day SMA. RSI is trending higher within neutral territory. Overall, no decisive path is clear while between these levels, but directional risks will increase once breached in either direction. 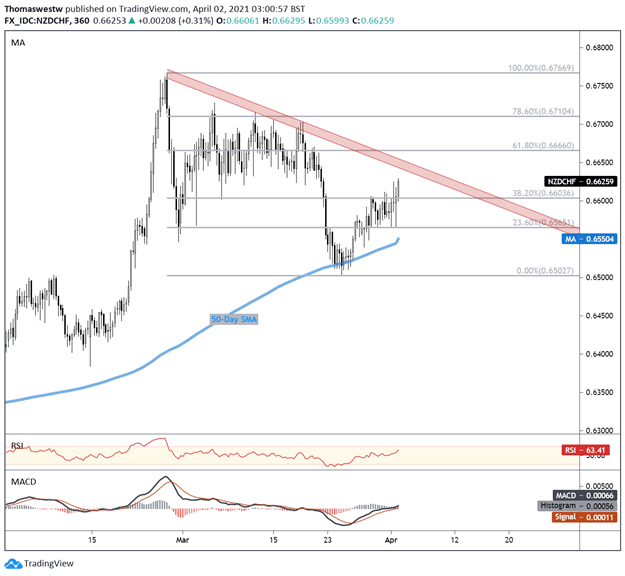 Against the Japanese Yen, the Kiwi has put in a nearly 3% gain since its March swing low. NZD/JPY is now aiming to overtake a longer-term trendline from the October 2020 swing low, which would reestablish the currency pair’s bullish long-term trend. That trendline was breached in mid-March during a sharp selloff.

The 61.8% Fibonacci retracement level from the March high/low appears to be offering resistance, which may see prices temporarily pause before moving higher, with the trendline as the next major obstacle. TO the downside, the 12-day Exponential Moving Average (EMA) could underpin prices. The 38.2% Fib level would likely serve as the next bearish price target. Price action appears to have a slightly bullish tilt, with the MACD and RSI both trending higher. 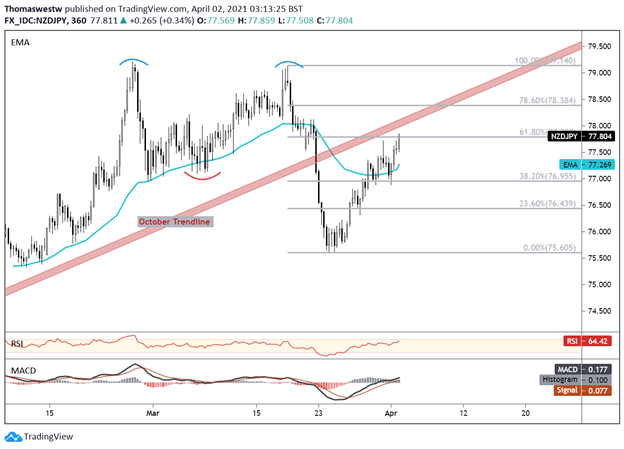