Despite an early January selloff, GBP/AUD has managed to drift higher this year, with the current price hovering above the 20-day Simple Moving Average (SMA). The recent pivot lower from the March high has revealed a descending trendline that may serve as an area of resistance on the next upswing. Although it is fragile with only two prior points of contact.

Prices may continue to drift higher after a bullish crossover between the 20-day and 100-day Simple Moving Averages. The trendline may cap the pair’s upside, but the 23.6% Fibonacci retracement level may provide more immediate resistance. To the downside, the 61.8% Fib level and SMAs (20- and 100-day) may offer support to keep the short-term momentum from January intact. 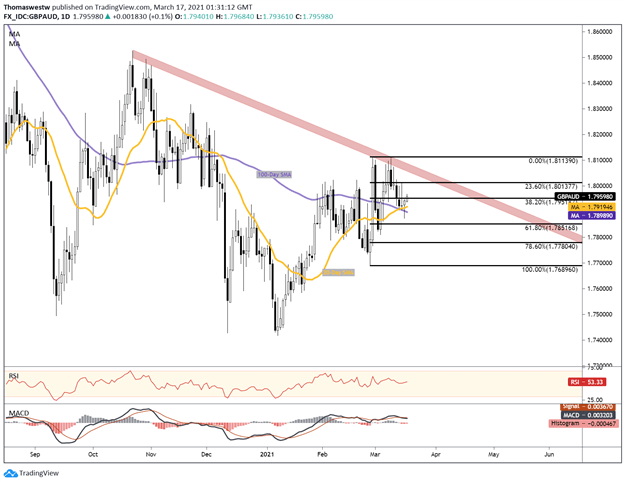 GBP/CAD is over 3% lower since its February swing high when prices began to tank. The cross appears to have found resistance at its long-term 200-day Simple Moving Average. Similar to the performance against the Australian Dollar, GBP/CAD is without a decisive long-term trend. Still, a series of higher lower from the 2020 low has put a slight long-term bullish tilt on the pair.

If the 200-day SMA fails to support prices, a weakly formed ascending trendline may underpin further downside. The 61.8% Fibonacci retracement from the December to February move could provide a possible layer of support along with the trendline. A break lower could open up the 1.7000 level as well. Overall, GBP/CAD may continue to gradually drift higher if the 200-day SMA holds. 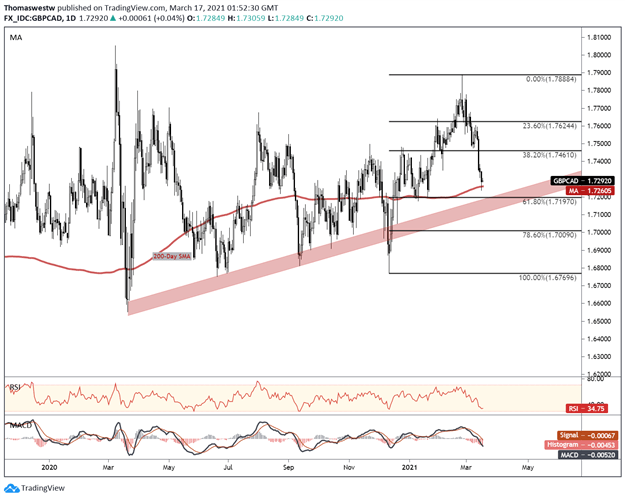 The British Pound looks like it is gearing up to test a descending trendline after the 20-day SMA put in a bullish crossover above its 100-day SMA. The pair has seen some choppy price action, but the broader trend lower from early 2020 remains intact. That said, the trend higher over the past few months is in danger.

A break above trendline resistance would likely lend a more bullish tilt on the pair, but prices were already rejected earlier this month. The 61.8% Fibonacci retracement looks to be underpinning prices, although the 20-day SMA is another near-term support level. Breaking lower would open up the 100-day SMA and 38.2% Fib level. 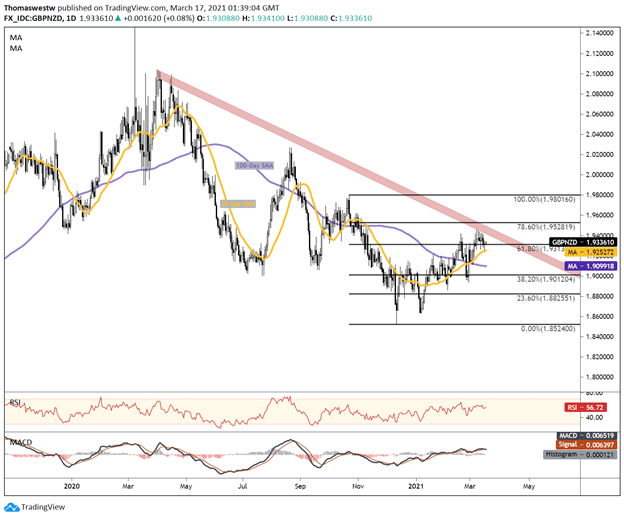