The Swiss Franc has been at the mercy of British Pound might since the start of the year and now faces a major test as GBP/CHF meets its downward trending 200-week Simple Moving Average. Along with the long-term moving average, a descending trendline from the May 2016 swing high sits directly overhead and could provide some confluent resistance.

These obstacles likely serve as the most substantial points of resistance for Sterling bulls to overcome before setting sights on higher ground versus the Franc. An upside break may give way to further gains, bringing the successive lower highs set throughout the past few years into view. Alternatively, a breakdown here could sap bullish energy and send the pair back to 1.2200 – a level of resistance seen in the post-pandemic 2020 trading range. 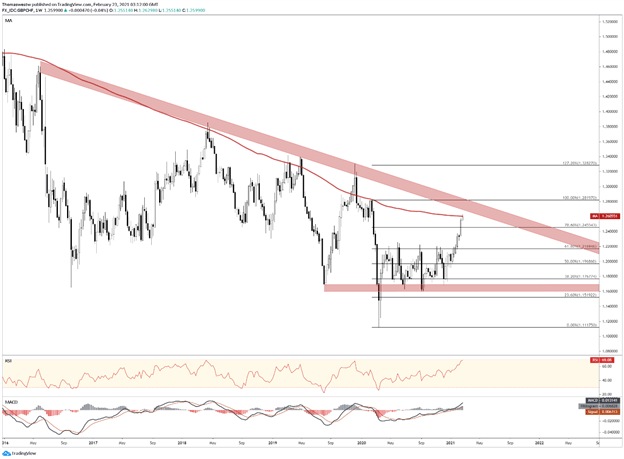 When stacked against the Australian Dollar, the Franc hasn’t seen kinder treatment. In fact, the Aussie-Dollar has been on an absolute tear against CHF, with AUD/CHF breaking above its 200-week SMA just last week with relative ease. So far the cross has shown no signs of slowing down, but given the velocity in its move higher, a short-term pullback would be unsurprising.

An unusually steep trendline from the post-pandemic March low offers a level for bulls to regroup before pushing higher. The recently defeated 200-week SMA may also give a reasonable point for prices to consolidate on a down move. Prices may extend higher, however, with the MACD oscillator continuing to drive higher and the Relative Strength Index appearing to be moving further to the upside despite being in overbought territory. 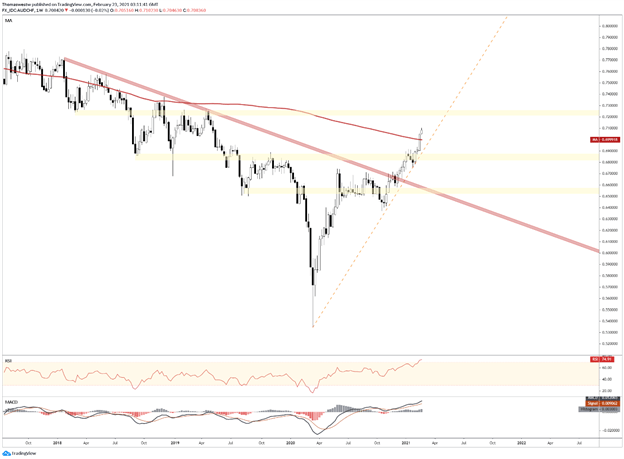 In line with the theme versus the British Pound and Australian Dollar, the Franc’s technical posture versus the Euro appears set for losses. EUR/CHF is currently testing an Ascending Triangle’s horizontal resistance after breaking above the 100-week SMA. While typically a continuation pattern, a break above resistance could reverse the pattern’s preceding downtrend and give way to fresh multi-month highs.

Momentum appears primed to carry prices higher, with the MACD line crossing above its signal line. The Relative Strength Index is also bullishly positioned to the upside with open air above before hitting its overbought zone. If resistance holds, however, a return to the triangle’s ascending trendline may be on the cards. 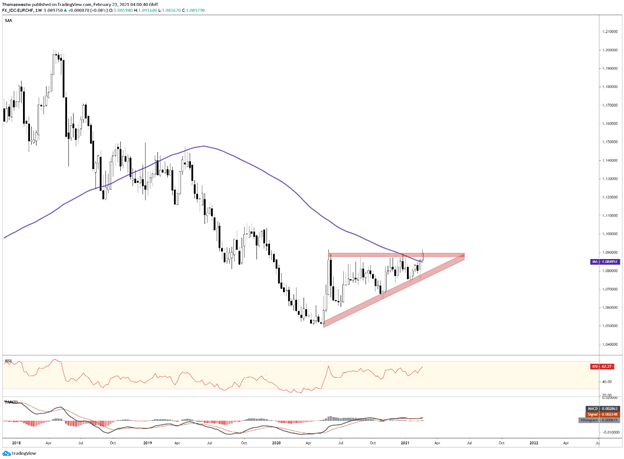