NZD/CHF pierced above a long-term trendline, rooted in the 2007 swing high after the Kiwi strengthened sharply in response to a stellar Q4 jobs report that pushed New Zealand’s unemployment rate down to 4.9%. The Swiss Franc has been on its back foot against NZD for months, with NZD/CHF now over 22% higher from its March low when Covid-19 caused a flight to safe-haven currencies.

While breaching through a long-standing trendline is bullish in itself, the Relative Strength Index (RSI) and MACD oscillators are hinting at more upside ahead, especially if the weekly candle closes above resistance. The RSI remains below the overbought 70 level on the weekly timeframe despite the sharp move higher. Moreover, the MACD line is signaling increasing momentum as it diverges further away from its signal line.

The 200-week Simple Moving Average may serve as an area of resistance along with the 100% Fibonacci retracement. A move lower would see prices approach the recently surrendered trendline, which could turn into support and give way to a period of consolidation or a quick rebound higher. Overall, confirming the weekly candle could mean that the path higher may be the most likely path for NZD/CHF. 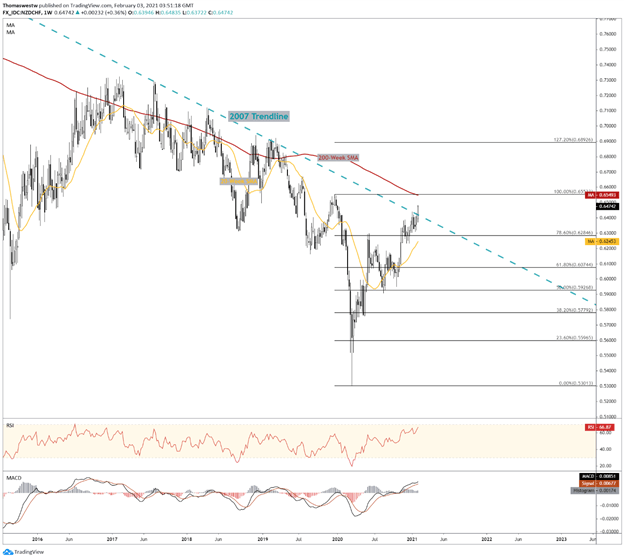 In like fashion, the Swiss Franc’s outlook against the British Pound is also poised for further weakness. GBP/CHF has pushed into fresh multi-month highs following a recent bout of Sterling strength. The move higher accelerated after breaking above the 61.8% Fibonacci retracement from the February-March move. A bullish Simple Moving Average crossoverpreceded that when the 20-day SMA overtook the 50-Day.

The RSI remains below its overbought 70 level as the oscillator trends higher with recent price action, suggesting untapped upside potential. Moreover, the MACD line is pulling away from its signal line as momentum picks up. Prices may find resistance at the 1.2300 psychological level before extending higher. A downside move will see prices test prior resistance near the 61.8% Fib level. 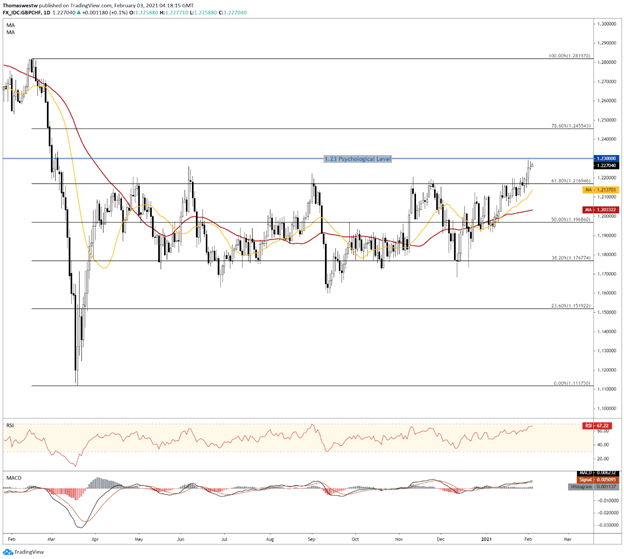