The Canadian Dollar appears to be at a disadvantage versus the New Zealand Dollar, with NZD/CAD currently testing trendline resistance as the cross progresses towards a third consecutive daily gain. The rally stems from a move higher formed in early December when the 78.6% Fibonacci retracement level from the 2019 high to the 2020 low underpinned a break lower after the longer-term rally failed to breach above its aforementioned resistance.

NZD/CAD’s technical posture appears poised for further gains. The MACD oscillator recently crossed above its signal line, reflecting a shift higher in momentum. The current trendline serves as the first barrier for bulls to defeat before setting sights on the 2019 high at 0.9281. That said, a reversal lower could form before making new highs, with the RSI indicator currently showing negative divergence. 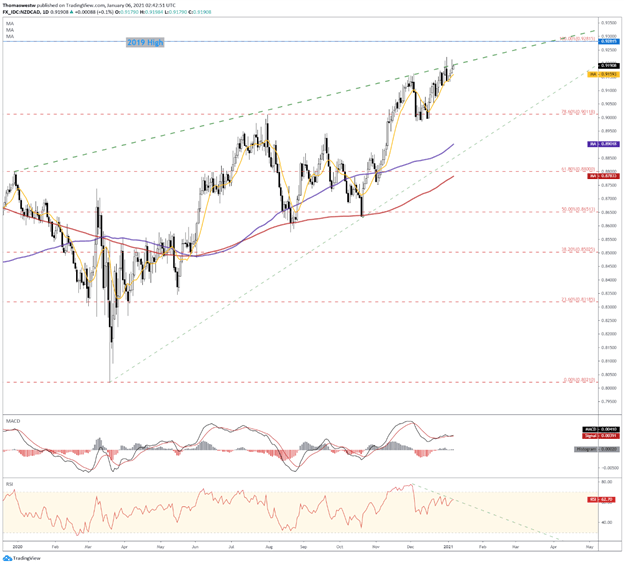 The Canadian Dollar’s path forward appears marginally better versus the Euro, with EUR/CAD trading just below the 23.6% Fib retracement (1.5583) from the February-March move. Trendline support from the February low may stifle any push lower as was the case last month. The most immediate challenge for Euro bulls will be reclaiming the aforesaid Fibonacci level.

EUR/CAD’s current technical stance doesn’t inspire a great deal of confidence in either direction. The momentum for the near-term skews slightly to the downside, with the MACD accelerating lower from its signal line. Moreover, the 9-day exponential moving average is pressuring prices, but the RSI oscillator is planted in a neutral stance, directly below the 50 midpoint. Thus, the next move could go either way. 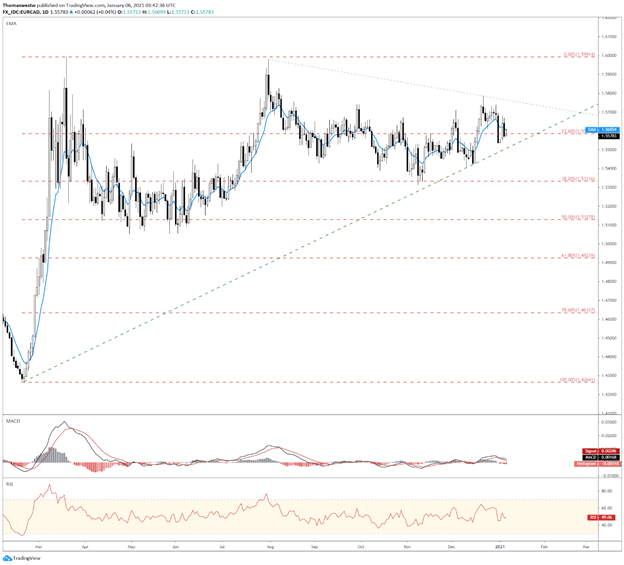 The Canadian Dollar’s outlook against the Australian Dollar appears to be the dimmest among the pairs discussed above. AUD/CAD set a new multi-year high as the cross extends a rally from October, with trendline support underpinning the ascent on any pullbacks. The 78.6% Fibonacci retracement from the 2018-2020 move likely will serve as major support on any pullback after the cross broke above the level following multiple intraday attempts in late December.

That said, the 9-day EMA is currently tracking closely below prices would test any bearish move. However, if bears manage a decisive break below both of those levels, the 20-day Simple Moving Average will provide another battle line. Below that, the longer-term trend will look to preserve the bullish trend from October. A pullback may form before the next extensions higher, however, with RSI in overbought territory, and the MACD oscillator signaling a slowdown in momentum. 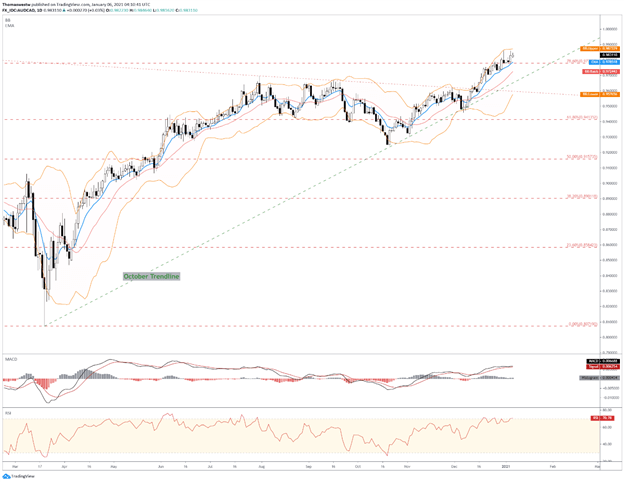