Yesterday, USD/MXN popped back strongly to its highest levels since the beginning of the month with the combination of a strong USD and selling in stocks. It is still mired in a choppy downtrend, but given the velocity at which it came back it could mark the beginning of a reversal.

Last week, I was sticking with a generally soft outlook, but did have this to say about the upside: “To dampen the bearish outlook, a strong rally (likely driven by risk-off) is needed to push USD/MXN at least above 18.97. This won’t turn the picture broadly bullish given price will still be outside the wedge, but it will help build the case for further upside, or at the very least keep shorts at bay.”

With 18.97 around the bend, and the trend-line from the top of the August move coming into approximate confluence, we could be on the verge of a big test in levels, trend, and the 3-yr triangle formation. A break into the 19s could really put USD/MXN in the driver seat.

If this were to be the case, the macro triangle that USD/MXN broke down out of in December against the long-term trend could be on the verge of getting reversed. As pointed out in a USD/MXN piece in December, the breakdown of the three-year-long triangle has been unfolding (in slow motion) against the primary long-term uptrend, which elevates the risk that this initial downside break could be a false one.

A rally into the 19s and then back inside the triangle could really light a fire for a top-side breakout that turns into a sustainable move to the upside. This is of course only a potential scenario at this time. We have seen USD/MXN get jumpy recently only to reverse lower again, but with macro-risks rising and price action like we saw in USD/JPY this week, there appears to be a higher-than-usual chance that a top-side move begins to grow legs. 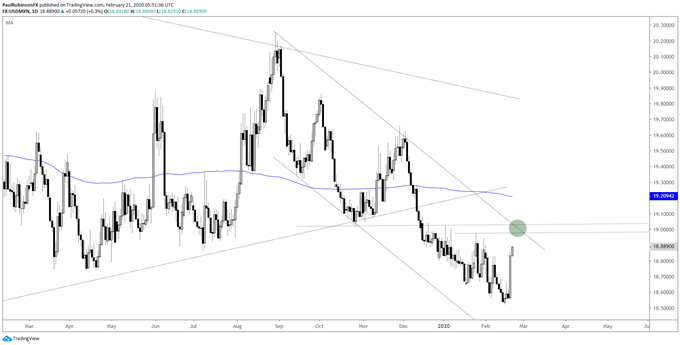