GBP/NOK has risen a little over 14 percent since the pair started to climb along the July uptrend. GBP/NOK recently cleared support at 11.8920 with an eye at key resistance at 12.2790. From a technical standpoint, buyers may take the opportunity to swoop as the pair approach support where selling pressure may abate. This also may be where the GBP/NOK stage another attempt at trying cracking the 12.2790 ceiling. 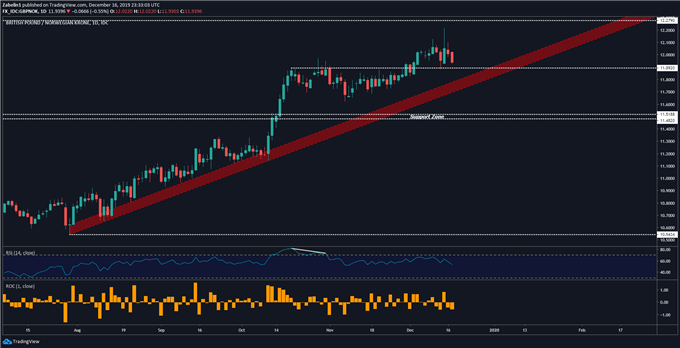 After breaking below the August uptrend in late November, GBP/SEK has been relatively directionless. The range-bound nature of the pair’s recent price action suggests traders are not certain as to whether outlook remains bullish or if a bearish reversal is in the cards. Traders may wait for an upside downside breakout with confirmation before committing capital. 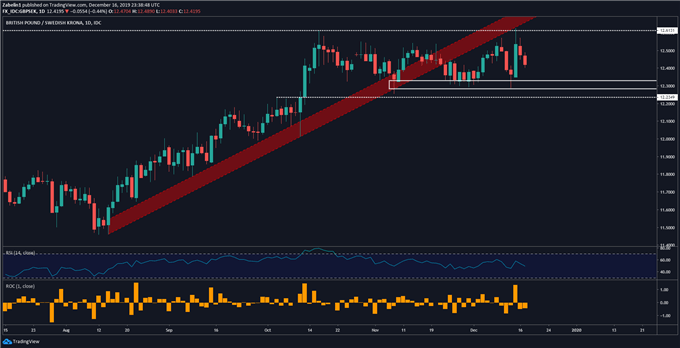 Brexit and the British Pound

When analyzing the British Pound, it is nearly impossible to do so without looking at the fundamental backdrop that GBP operates in. More specifically, what are the most recent Brexit developments and is it increasing or decreasing the likelihood of a no-deal outcome. As forecasted, Sterling had a relief rally following the market-friendly election, though recent complications are already trimming GBP’s gains.

As noted earlier: "performing technical analysis on a pair whose counter currency is linked to a fundamentally volatile environment makes it unusually difficult and unpredictable. There is no telling when a sudden political development will cross the headlines and what the respective magnitude of the price swing will be".

The most recent development to afflict the politically-exhausted British Pound was news that Prime Minister Boris Johnson is intending on making it illegal to extend the transition period beyond December 2020. If he is unable to secure a deal by that point, the default would be a no-deal Brexit. This came on the heels of a warning from Brussels that trade agreements take years to draft, and the UK’s ability to do it in one is dubious.