The Indian Rupee has been falling against the US Dollar lately, as anticipated in my USD/INR outlook. India is becoming increasingly vulnerable to a teetering banking sector as the US-China trade war threatens global growth. These fundamental developments have led to aggressive easing from the Reserve Bank of India (RBI), which cut rates five times so far this year. The government also delivered fiscal support via corporate tax cuts.

Growing concerns about the local economy have been underscored over the past 24 hours. Indian industrial production unexpectedly shrank 4.3 percent y/y in September against estimates of a 2.5% contraction. August’s decline was also revised weaker form -1.1% to -1.4%. Looking at the immediate chart below, this has resulted in the worst decline in industrial production since October 2011, almost 8 years ago.

There is more key data due ahead. On Wednesday, Indian CPI is expected to rise 4.35 percent y/y in October from 3.99% prior. A softer-than-expected result may continue fueling near-term RBI easing bets with the next interest rate announcement on December 5. Until then, the USD/INR remains tied to developments in US-China trade talks given its importance to Emerging Market assets. 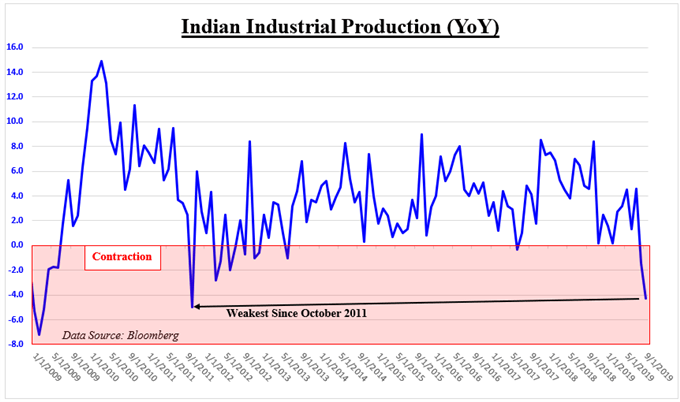 USD/INR has closed above the top of a Descending Triangle chart pattern, opening the door to a resumption of the uptrend that took place from July to late August. While this is usually a bearish setup that comes into play after a close under the floor, a breakout above the ceiling can signal the opposite given confirmation.

Near-term resistance stands in the way as the October high at 71.72. A push above this price could pave the way for a retest of peaks from December 2018. This is a range between 72.13 and 72.55. Keeping the uptrend intact may also be a rising support line from July. 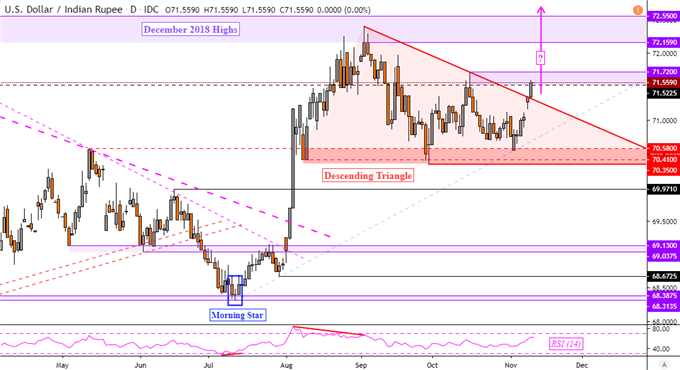 This is as the Nifty 50 - India’s local benchmark stock index - looks increasingly vulnerable to a reversal from a technical standpoint. An Evening Star candlestick pattern emerged at the most recent peak under 12100. This is a bearish pattern that with confirmation, could pave the way for a turnaround of the dominant uptrend from late September. A daily close under rising support could pave the way for this – red line below. 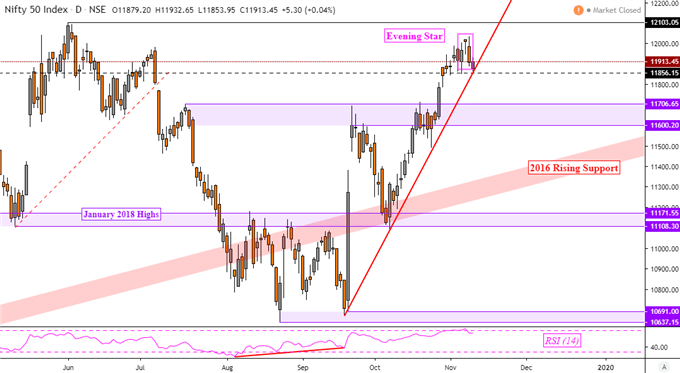