- Attempts by new UK Prime Minister Boris Johnson to reframe the Brexit negotiations appear to be falling on deaf ears in Brussels.

- It’s too soon to dismiss the possibility that a no deal, hard Brexit could ultimately lead to a complete dissolution of the UK vis-à-vis another Scottish independence referendum.

- Retail trader positioning suggests that the British Pound may be under more pressure heading into the final days of July.

It’s only been a few days into the tenure of UK Prime Minister Boris Johnson and expectations about Brexit are already starting to calcify. The new UK prime minister has come out with strong words, saying “If an agreement is to be reached, it must be clearly understood that the way to the deal goes by way of the abolition of the backstop.” This may be a fraught attempt at reframing the Brexit negotiations.

Brexit Hasn’t Been and Won’t Be Good for Sterling

Unfortunately for UK PM Johnson, the Brexit negotiations involve a counterparty, in this case, the EU. EU’s chief Brexit negotiator Michel Barnier said yesterday that UK PM Johnson’s “combative” was proving divisive. European Commission President Jean-Claude Juncker called the existing deal “the best and only agreement possible,” or in other words, a renegotiation would not occur.

The mere prospect of the UK leaving the EU has been extremely harmful to the British Pound. Losing more than 20% against most of its major counterparts since the June 2016 Brexit vote, the British Pound is unlikely to recover any significant value so long as the UK is poised to leave the EU. Comments from UK PM Johnson, EU Brexit negotiator Barnier, and EU Commission President Juncker would suggest that a no-deal, hard Brexit outcome is the most likely outcome.

Under a no-deal, hard Brexit outcome, traders should expect further losses by the British Pound, with EUR/GBP likely to trade closer to parity (1.0000), GBP/JPY could trade towards 120.00, while GBP/USD could fall towards 1.1000 during the first 12-months of a no-deal, hard Brexit (keeping in mind that the European Central Bank and Federal Reserve would likely cut interest rates to prevent Brexit shocks from impacting either the Eurozone or US economies too significantly, thereby capping potential gains by the Euro and the US Dollar versus the British Pound).

But this would not be the worst case scenario for the British Pound; in the event that Scotland holds a second independence referendum, it’s likely markets will be facing down the threat of disintegration of Great Britain as we know it. Under a no-deal, hard Brexit coupled with a Scottish vote to leave the UK, traders should expect EUR/GBP to climb towards 1.0500, GBP/JPY to fall towards 112.50, and GBP/USD to drop closer to 1.0500.

The only hope that the British Pound has for a significant recover is if Brexit is avoided altogether: after all, it will be impossible to replace the economic activity lost endured from leaving the EU, the world’s largest single market. In the event that the next UK prime minister has a change of heart and takes steps to avoid Brexit (e.g. a second referendum or withdrawing Article 50), EUR/GBP could fall back towards £0.8000, GBP/JPY could rally back towards 150.00, and GBP/USD could climb back towards $1.4000; a full-scale recovery back to pre-June 2016 Brexit vote levels is highly unlikely in the immediate aftermath of the cancellation of Brexit. 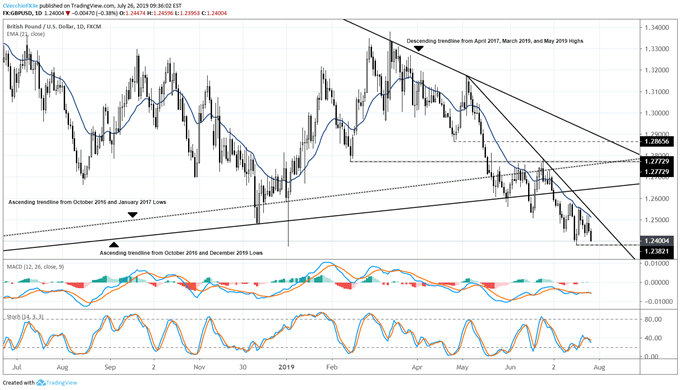 GBP/USD price remains below the daily 8-, 13-, and 21-EMA envelope, and if the daily candle were to finish at these levels, it would represent the lowest close of the year. Daily MACD has just turned lower again while bearish territory, a sign of significant weakness. Slow Stochastics have turned lower as well. Bearish momentum is accelearting again for GBP/USD; a breakdown to fresh yearly lows appears to be around the corner. 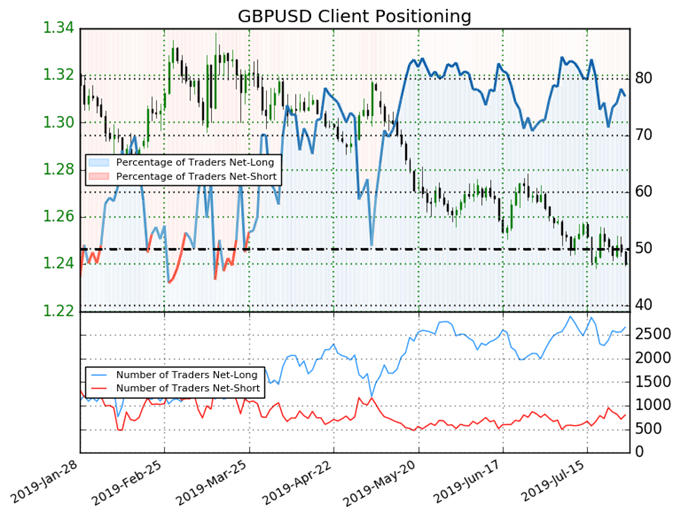 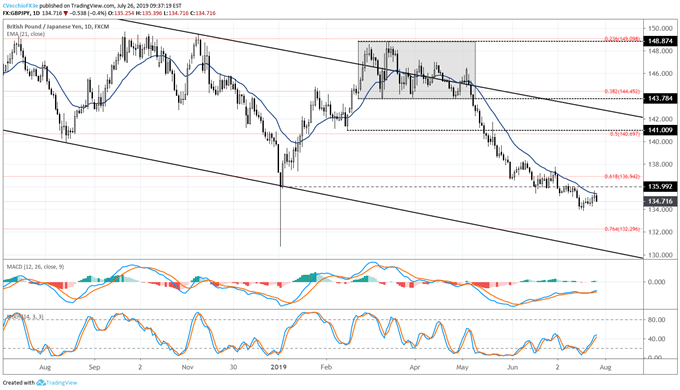 Like GBP/USD, GBP/JPY prices are sustaining a move below its daily 21-EMA, but unlike GBP/USD, daily MACD and Slow Stochastics are trending higher in bearish territory. What this means is that while GBP/JPY's 'macro' structure is bearish, it's 'micro' structure is in a state of recovery; traders should be looking for selling opportunities in context of the recent gains as long GBP/JPY holds below the former 2019 low close at 135.99. A drop to new 2019 lows may be coming soon. 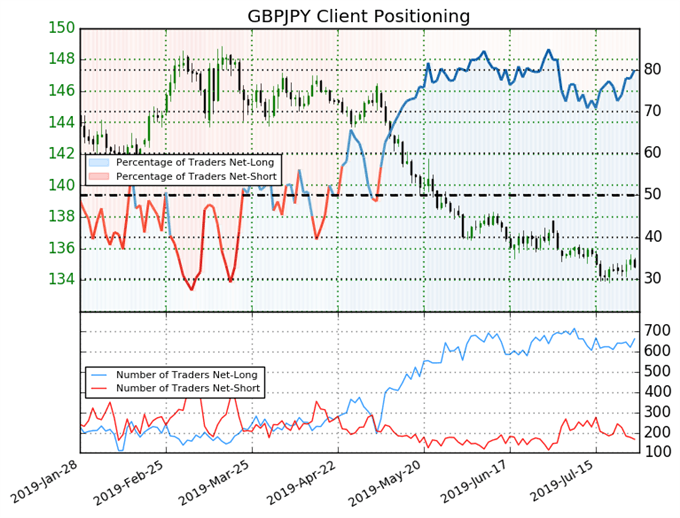 We typically take a contrarian view to crowd sentiment, and the fact traders are net-long suggests GBP/JPY prices may continue to fall. Traders are further net-long than yesterday and last week, and the combination of current sentiment and recent changes gives us a stronger GBP/JPY-bearish contrarian trading bias.