Currency option traders are suggesting that Thursday’s economic calendar event risk for the Australian Dollar should not be taken lightly. This is indicated by the recent jump in AUDUSD overnight implied volatility to 8.66 percent and is roughly in line with the reading of 8.88 percent headed into last month’s Aussie jobs data release.

The rise in implied volatility indicates that spot AUDUSD may experience a sizable response to the upcoming Aussie jobs data – particularly if the headline employment change and unemployment rate figures cross the wire materially above or below consensus. If the closely watch economic indicators miss to the downside, it could push the odds of another RBA rate cut higher and send the Australian Dollar lower in turn.

According to Bloomberg’s median consensus, markets are expecting Australia’s unemployment rate and change in employment numbers for June to come in at 5.2 percent and 9.0K respectively.

Sustained dovishness hinted at in the latest RBA minutes could keep the Australian Dollar under pressure – more so if the upcoming Australia employment data fails to inspire optimism for AUD bulls. The RBA has already cut rates twice this year and expressed willingness to ease monetary policy further to “support sustainable growth in the economy” if needed.

Correspondingly, more RBA rate cuts could be on the table before the year ends if Australia’s central bank does in fact decide to keep juicing the economy with more rate cuts in response to lackluster labor market data. 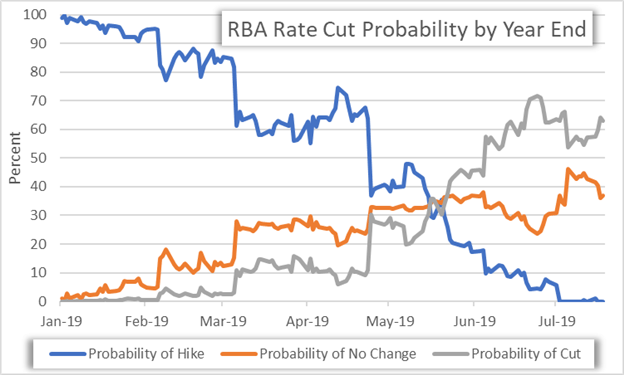 The probability that the RBA lowers the overnight cash rate by another 25 basis points by its December 3 meeting stands at 63 percent currently. Yet, even if the Aussie jobs data inspires optimism for AUDUSD bulls, the latest trade tiff between the US and China with President Trump threatening additional tariffs could keep RBA rate cut bets bid and upside in spot AUDUSD at bay.

However, the uptrend starting to develop in spot AUDUSD could be reiterated if Thursday’s Aussie jobs data noticeably tops market estimates. Looking to the technical, spot AUDUSD might find some buoyance from the rising exponential moving averages, but price action could struggle to eclipse resistance posed by the 50.0 percent retracement from April’s high – a major area of confluence around the 0.7000 handle. 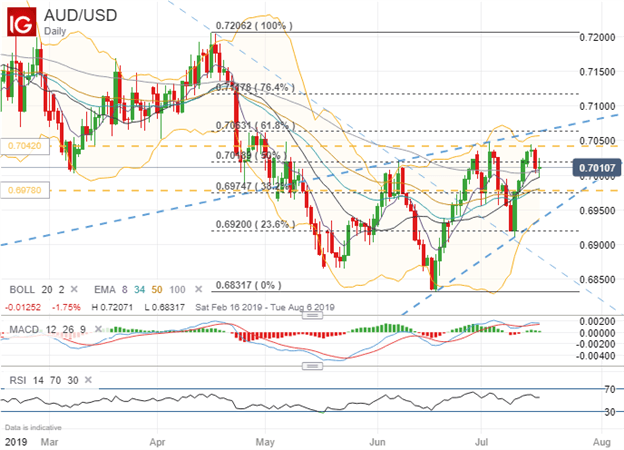 That said,the path of least resistance could be a test of support near the 38.2 percent Fibonacci retracement level which closely aligns with the lower bound of the option implied trading range. Spot AUDUSD is calculated to range as high as 0.7042 or as low as 0.6978 during Thursday’s trading session in response to the Australian jobs report with a 68 percent statistical probability. This 64-pip trading range is estimated from a 1-standard deviation move from spot AUDUSD using the overnight implied volatility reading of 8.66 percent.