The Philippine Peso could be looking at more gains against the US Dollar after USDPHP took out key range support between 51.59 and 51.69. This is a major achievement because in the past, we saw this psychological area stem declines in the currency pair, resulting in near-term reversals. Fundamentally, this has occurred amidst broad US Dollar weakness in the aftermath of last week’s Fed interest rate decision.

We have seen further closes to the downside as the Peso eyes 51.16 which is former support/resistance from early 2018. Falling through that opens the door to testing the rising trend line going all the way back to 2013. That could either be a turning point for USDPHP or mark the extension of the dominant downtrend since October 2018. 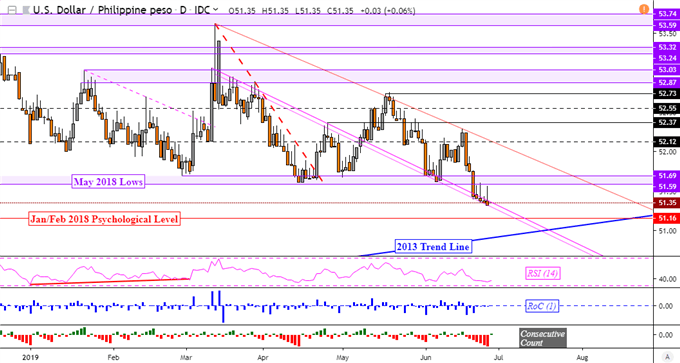 The Singapore Dollar is facing a similar situation as the Philippine Peso. After USDSGD cleared support at 1.3608, that has brought it closer towards the rising trend line from January 2018. This potential key turning point is closely aligned with the psychological barrier between 1.3472 and 1.3444. A close under near-term support at 1.3516 would likely pave the path for testing that zone.

Down the road, if the trend line from 2018 holds and results in a bounce, the Singapore Dollar could be pushed towards falling resistance from May – blue line on the chart below. That may keep the dominant downtrend intact, sending the pair back towards 1.3444. You may follow me on Twitter here @ddubrovskyFX for more timely updates on ASEAN currencies such as the Singapore Dollar and Philippine Peso. 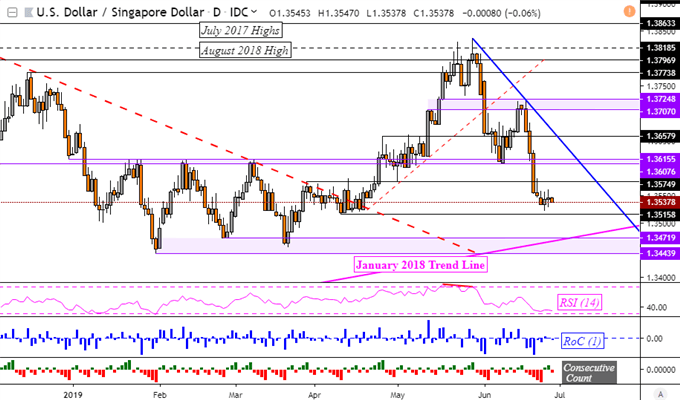 The Indian Rupee is a step closer towards resuming gains against the US Dollar. USDINR finds itself attempting to close under the rising support from March. Confirming this breakout ought to need taking out range support between 69.04 and 69.13 which exposes the next psychological barrier between 68.39 and 68.31. Clearing the latter opens the door to extending the downtrend from October 2018.

Fundamentally, there is the risk that INR weakens if US President Donald Trump expands his trade war to India amidst brewing tensions with Prime Minister Narendra Modi. In the event of a reversal to the upside, keep an eye on the two falling trend lines from the end of last year – two pink lines on the chart below. Beyond them lays the June 17 high at 69.97 which may step in as resistance. 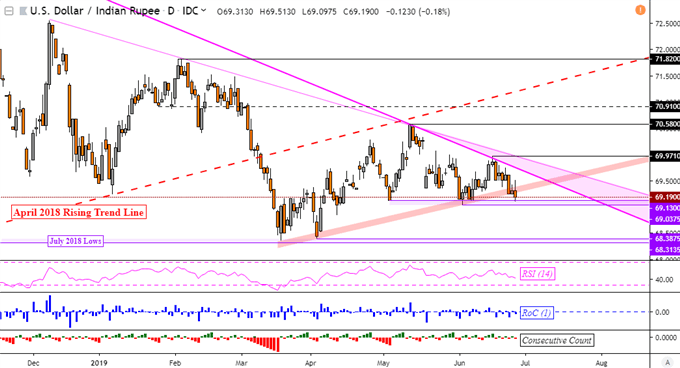 Meanwhile, the Malaysian Ringgit broke through rising support from the middle of April, opening the door to extending gains against the US Dollar. At the time of this writing, USDMYR is attempting to clear support at 4.1448 which if taken out, opens the door to testing 4.1250 thereafter. Gains in the interim on the other hand places the focus on what could be a potential falling trend line from late May – blue line below. 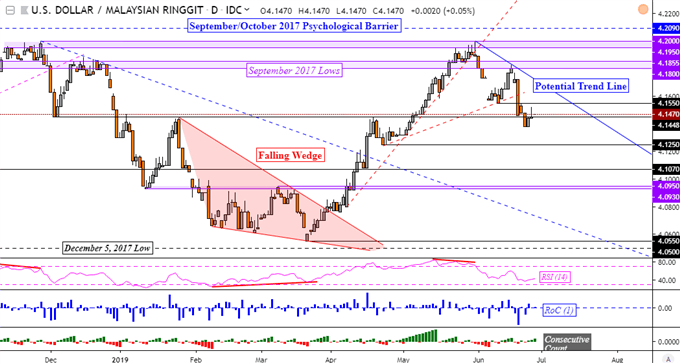