The British Pound hasn’t been able to take advantage of the weak US Dollar environment after the June Fed meeting, and Brexit is to blame. With the Bank of England’s June meeting producing little meaningful change because of the ongoing Brexit negotiations, the key driver for the Sterling has been none other than the Tory leadership election contest – which in turn, will likely determine the fate of Brexit.

After easily winning the first four rounds of votes, Boris Johnson emerged on Thursday with 160 votes as the favorite the next Tory party leader, easily beating out second place finisher and former Remainer Jeremy Hunt, who had 77 votes. Michael Gove was knocked out after only receiving 75 votes.

As it were, Boris Johnson is a steadfast Brexiteer. While Johnson is willing to renegotiate the EU-UK Withdrawal Agreement (something that former UK PM Theresa May was unwilling to do), he does not want to see Article 50 extended any further and therefore is prepared to leave the EU at the end of October 2019 with or without a deal.

Traders are looking ahead and seeing a future where, regardless of what results the Tory party leadership elections yield, the next UK prime minister (Hunt, Boris Johnson, or Labour party leader Jeremy Corbyn) is going to be pro-Brexit and therefore unwilling to take the steps necessary to avoid a no deal, hard Brexit come October.

Over the next few weeks, the Brexit saga will cool off, as focus will turn to canvassing across the UK, according to my colleague Justin McQueen’s review of what’s next for Brexit:

With the latest Brexit news keeping fears of a no deal, hard Brexit at the forefront, the British Pound has not been able to take advantage of a more risk seeking environment. It stands to reason that if market sentiment reverses lower, the British Pound may be a leader to the downside after failing to rally more significantly. 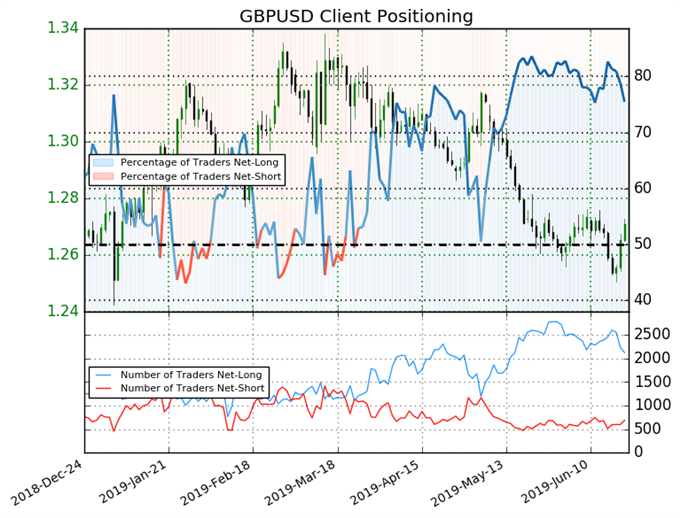 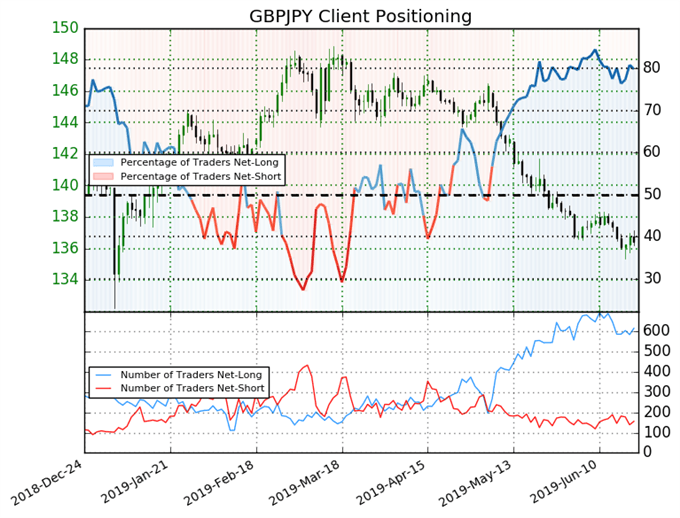 We typically take a contrarian view to crowd sentiment, and the fact traders are net-long suggests GBPJPY prices may continue to fall. Positioning is less net-long than yesterday but more net-long from last week. The combination of current sentiment and recent changes gives us a further mixed GBPJPY trading bias. 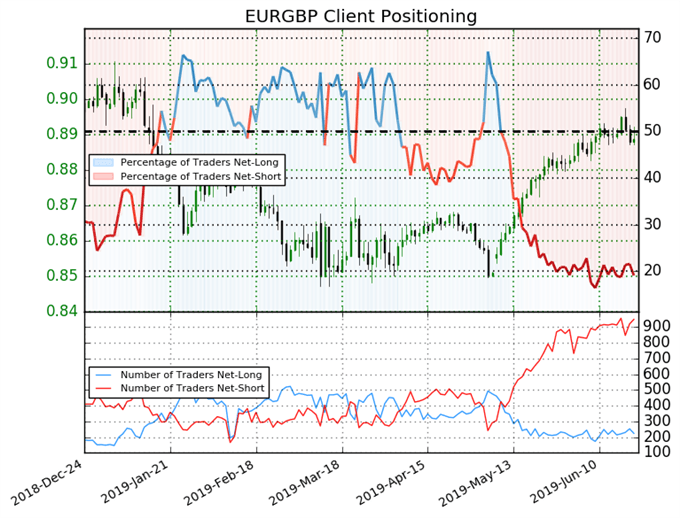