The USDMYR rising support line from April held after a false downside breakout, resuming weakness in the Malaysian Ringgit. However, the currency pair was unable to clear the psychological barrier between 4.1800 and 4.1855 which could be due for another retest. Like with the Indian Rupee, USDMYR is running out of room to consolidate between rising support and horizontal resistance.

If the trend line holds again and resistance is taken out, that exposes the current 2019 high just around 4.2000. This area acted as resistance back in November 2018 when USDMYR topped, paving the way for a reversal down to 4.0550. Otherwise, reversing the dominant uptrend since March entails taking out support at 4.1550. Clearing that exposes 4.1448 on the USDMYR daily chart below. 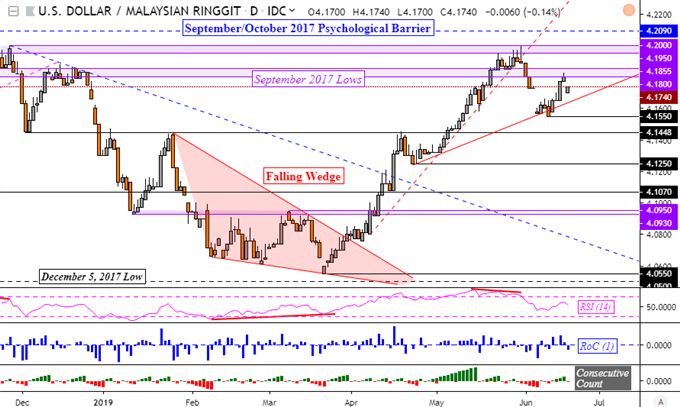 Meanwhile, USDPHP could be looking at another retest of the critical support range between 51.59 and 51.69 after a falling trend line from March appears to have formed (red line on the chart below). The Philippine Peso has spent most of this year consolidating against the US Dollar, making for a breakout, be it lower or higher, a potentially consequential outcome.

If USDPHP takes out support, that exposes a long-term rising trend line going back to 2013 that is keeping the Peso under pressure. But getting there involves taking out 51.16, a psychological level back in early 2018. Otherwise, climbing opens the door to continued consolidation unless in the medium-term, key resistance is taken out at 52.73, 53.03 and then the spikes seen in the middle of March where prices touched 53.59. 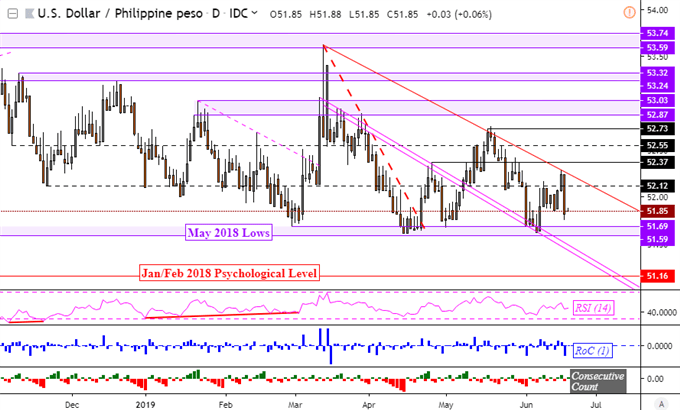 Indian Rupee weakness was tamed after USDINR was unable to clear a couple of descending trend lines from the third quarter of 2018. This left the currency pair eyeing a near-term rising support channel from March as it runs out of room to consolidate. In the medium-term, I believe the possibility of an escalation in US-India trade tensions could fuel a reversal of the dominant downtrend from the end of last year.

A retest of near-term support, between 69.04 and 69.13, seems like the next step for USDINR. If taken out, that does open the door to testing current 2019 lows above 68.32. Otherwise, clearing resistance above 69.97 exposes 70.58. For timely fundamental and technical updates on the Rupee and ASEAN currencies, you may follow me on Twitter here @ddubrovskyFX. 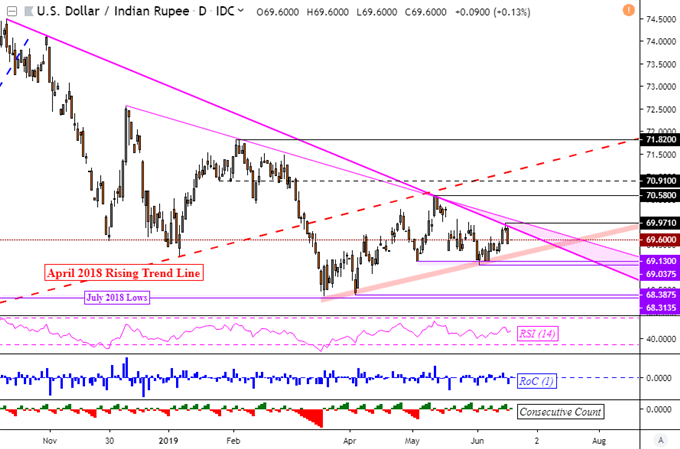 The Singapore Dollar succumbed to selling pressure since we last looked at the currency as USDSGD bounced on support at 1.3608. Thereafter, 1.3658 was cleared and the next range of support appears to have solidified between 1.3725 and 1.3707. This left prices consolidating above 1.3658 at the time of this writing.

The break under the rising support line from late April (red line on the chart below), appears to be losing its validity as horizontal support and resistance levels dominate Singapore Dollar trading price action. We may be due for another retest of 1.3608. If broken, keep an eye on 1.3545. Otherwise, gains leave 1.3774 in sight. 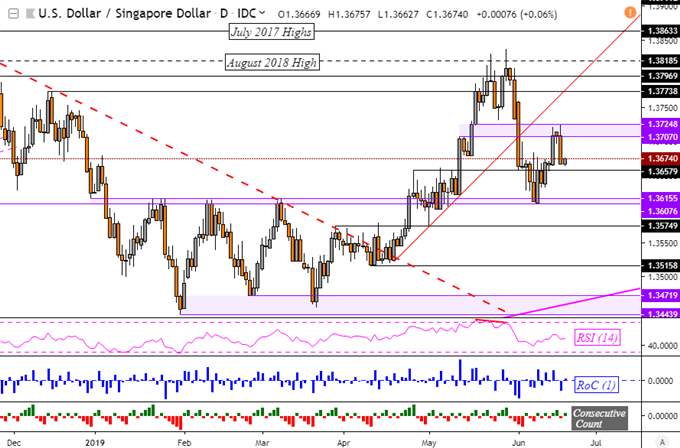