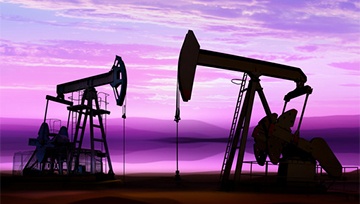 WTI crude oil holding onto May 6 reversal-day at support

Last Monday, on the global gap-down in risk assets due to rising tensions between the U.S. and China, crude oil managed to not only recoup losses but post a powerful reversal-day. It was a timely event as the reversal came at a confluence of support by way of the 200-day MA and lower parallel from earlier this year.

Despite stocks swooning even further after last Monday’s downdraft in risk assets, both WTI and Brent contracts held above the key-reversal day lows. These important reversal events have gained even further weight in the technical landscape, for WTI especially, as strong buying pressure at support marks a solid line-in-the-sand for traders to operate off of.

The old rule of thumb, ‘trust support (and resistance) until broken’ applies here.

A rally from here might not be awe-inspiring, especially if risk appetite in general remains soft, but a move up towards the April high at 66.46 could be in the cards with some firming up in risk appetite.

Should time begin to work against oil and buyers disappear, then recent price action could turn into a continuation pattern that leads to a breakdown below support.

In the event of a break below the May 6 low at 59.98, look for crude oil to weaken further and test swing levels created during the rise over the course of the past few months; 58 down to mid-57s, followed by the 55 region could come into play on a break of nearby support. 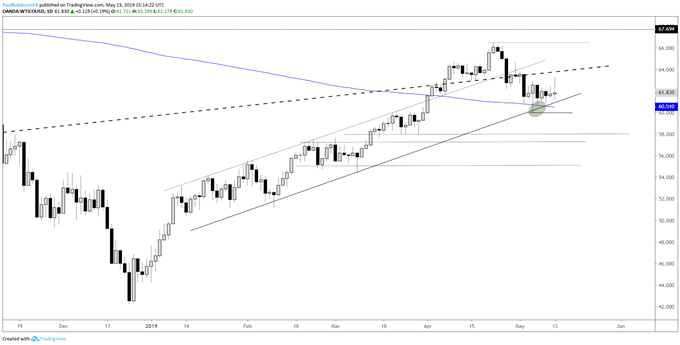 Brent contract may be more vulnerable should weakness set in

The Brent contract may run out of fuel faster than WTI; it has the similar parallel slope line as to the U.S. contract, but not as support, though, rather resistance. Brent is retreating from there right now and it may continue to slow things down even if the trading bias remains to the upside in the near-term.

A break below last Monday’s reversal-day low at 69.23 and the 200-day MA which is fractionally beneath there, should have Brent trading back towards a slope extending up from the February 2016 low, near the 67-mark.